On Pearl Harbour day, 7th December we move into our new home near the historic township of Morpeth NSW, some trips around locally have revealed a huge number of old historic buildings, sadly many in neglect yet many others being converted and used for new business. Driving around can be both a joy and sad affair when seeing the contrasts in how people care and don't with many of those beautiful old homes and commercial properties.

One of the problems though is that as the Morpeth township as such is classed as a heritage area along with the buildings that exist, anyone buying in and wanting to renovate old homes have to do it in a way that conforms with heritage and that means a lot of money.  A case point being a corner house on the main st that looks ready to fall down, the back yard overgrown and all waiting to fall down or be taken over by nature,

The chap who purchased the home had paid cash and had over $300K available to fix it up, all the money went quick owing to the heritage covenant that was on the house. Looking to the outside it appears its nothing, apparently some work was done inside but its unlikely to be finished.

Living, in the adjoining suburb and building there also has its issues as the local council loves to change rules on regular basis meaning one can get approval for a specific item in construction only to find they have changed the conditions and one can have problems getting approval under the new rules. Love the governments in all aspects as they all know how to leech the people.

The new home for Essence means, well hopefully that is, the dust and humidity will not be the issues that was had at Wadalba in the converted 6x6 external measurement garage, also the tight access to the two tracks under the range on the peninsular section.  The new home for the layout is 6 x 6.3m, internal measurements, the longer wall is the one where the peninsular goes.  While the measurements are all but the same, that is not really the case as Wadalba had 120mm steel wall truss like supports, coupled with the witches hat horizontal frames, all round, took at least 250mm off each side of the walls, with a further 20mm that the backdrops took up.

Overall then, the new layout will affectively provide me with a good amount of extra room of approx. 300, by 600mm more in layout space, which also means the tight area at the tunnel levels on the peninsular will have more space to work in.

I had originally worked on having minimum radius of 28" which overall worked ok but a couple of loco's namely the 57, 58 & 59 had some difficulty at certain locations, with the intention of getting to 32, my hope is that will be cured but I also realise that on at least 3 spots that were problematic will also need to be fixed.

As a start, I will be working on the baseboards to change the method of the frame and how they are attached, I had big problems with the pull down finding the screws, which I had used from the baseboard down to the frames and supports, the other aspect that I used long timbers that affectively meant that two main sections were often using part of a single longitude frame board, therefore somewhat a nightmare, my intentions are to build the frames separately and screw up from under the bases, ease of removal and not interfere with layout scenicking.

Double lift bridges.  The old layout had a single lift bridge running down across the entry door and down a side and end wall to the staging yard and continuous main line.  In the new room, there will be a need for two lift bridges on that same side, as the door is on the same side but other end of the wall. As I want to basically keep the old plan and layout but just fix it, after talking to other modellers having two bridges, basically one on top of the other, top with one track and the bottom two, would be much simpler and less time consuming than trying to rebuild to a new design or, trying to rotate the layout from one end to the other.

No matter how I looked and drew the plans up, it meant a fair bit of extra cost in purchasing new baseboards, underlays as well as reconstruct a lot of items such as in the loco depot. One other factor then crept in and that was that the ply sheets, rather than coming in the old 2440 x 1220 sizes are now only 2400x1200, while not a lot of difference size wise it does affect the actual layout plan especially for the Moyblayne end which has the larger sheets on two sections.

As planning has taken place, with the extra space now available I have a desire to add a couple of new items to the layout, one of them will be a wooden bridge over a creek, this will fit in to the section that runs between Moblayne and Akuna, from behind the roundhouse.  An early photo of the location is here 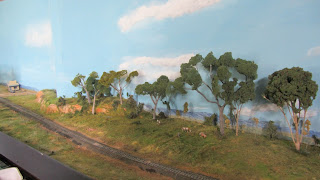 At the extreme left is a store and road crossing that sits to other side of where the roundhouse is, the line rises straight before curving to the left and then round to the top side where Akuna is located. There is a rail join as well as a baseboard join, which is where I will be putting the creek with a wooden bridge over the creek.  As the primary storage sidings are underneath this section, I have room to construct a ply frame that will have the bridge and creek constructed to be screwed up to both sides of the existing baseboard.  The length of the insert and bridge will be approx. 400mm in length which covers the extra length for that side as well as the other side of the room

The primary area to be started on will be Moblayne depot end and then this side wall section. In saying all of this I doubt if a lot of work will be carried out much before February next year, but one never knows.  I certainly look forward to the move, sorting out a lot of items, and will have some models up for sale as well, and then into the rebuild over time in order to hopefully not repeat past mistakes.
Posted by Colin Hussey at 22:37