Having the extra space in the new train room and looking to the way we had asked and believed the room size internally would be,6300x6100mm for some reason which is what I simply believed we would have, so getting a bit of enthusiasm to do some planning I got the tape measure out and measured the walls, double and triple checking only showed 6100x6100, not happy about that and believing I had been duded, out to the plans we had signed off on and they showed the smaller size, blowed if I know how we missed that, and nothing we can do about it.

So after stewing on it for a while I realised that I still had around 300mm extra than the old garage size which allows me to go for the larger radius curves and the extra space on the peninsular to get to if needed.

All the base boards are 13mm thick, 2440x1220mm non structural ply wood, my thinking had me looking at needing to purchase one more to cover the extra board space needed, but checking around, I found that those boards no longer existed or at least available up here, like supermarket shopping these days with shrinking packages and same prices (the high cost of low inflation??????) all boards now only come in 12mm x 2000x1200, and the price is around $7.00 more per sheet.

Thankfully not a huge difference but more expense for less product, at least the background MDF sheets have not shrunk in size with them still available in the old 2440x1220 size at fair pricings.

Tonight after some thinking and measuring up I decided to start a bit of testing and work on the layout in preparation for the first section to go up. That section includes the loco depot and on a full larger sized Ply sheet, to see how much extras board would be needed for the 32" radius curve, I set about spraying the track around the roundhouse to loosen and lift it, so the guide would work, hopping all along that my glueing down of the track with diluted PVA would lift easy, thankfully it did as I slide a box cutter long blade under the sleepers and brought out the ballast and had the guide go smoothly around to set the curve up nicely.

Only two pin nails were found but they lifted readily, with that working I got the adjoining section that is the start of the uphill section to Akuna. 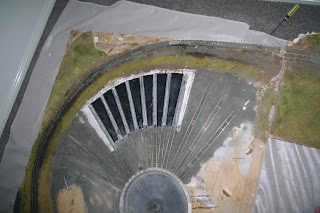 The above photo, shows the roundhouse pits, along with the track in the back at the new radius, I was surprised that the old radius was not that much under it, likely I would suspect at 30", in the lifting of the track I found a reason why some loco's leading bogies would derail approximately at the spot outside, opposite the 2nd pit from the left, there was a rail join there with no sleepers under the join and a dip at that spot. Also had wagons uncouple there at times which showed some discrepancies in the coupler heights, another problem hopefully will be rid of, 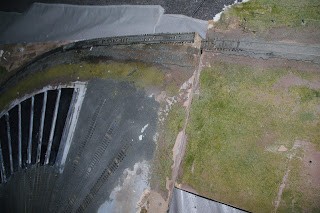 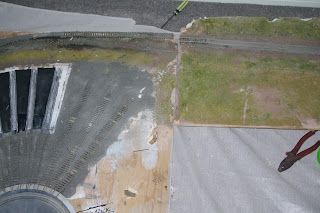 The above two show more of the join location for the track, there is damage to  track on the grade section to Akuna. As I have both new track and some old track including short lengths I will try the short lengths first and hope it works, I will likely need to replace the last section of track behind the roundhouse as it is now shorter than previously, I intend to have joiners not soldered in at the joins leaving the joiners to move freely if a need comes up to lift sections especially at baseboard joins., also helps isolate sections by having a minimal gap and slide the joiner to break the contact.

I have found since getting to the shed pits, that several of the spacers had worked loose, so some repair work on those spots have been addressed.

Its not much news, but its a tentative first step though, and gets me enthused towards it. I would love to find an hour each day to do some work on the layout, That is if all the other unpacking that needs to be done and sorted allows for it.
Posted by Colin Hussey at 22:48