Its been some time since the old Essence was pulled down, and over 2 years have passed since our move from the Central Coast.  Little has been done on Essence in that time, mainly some sorting out which it too played 5th fiddle to getting the house in some sort of order, and with 10 months now since the move into the new home a lot of work has had to be done to clear, clean and get the yard areas going. I would say that the outside is now around 95% finished with mainly the grass to be grown, and that will happen pretty quick with the summer warmth and some rain to bring the runners on.  I have chosen to simply use the native couch grass and get it to grow rather than spend money on new turf, glad I went this way as its the easiest grass to mow.

With that finished we want to concentrate and have one day per week for those terrible sorting out and chuck days, after too many years of accumulations.

Earlier when our youngest son was here for a few days he helped me get the largest base board up on its legs, and supports, this is the heaviest and overall the largest of the single section that has its place in a corner, the board is 2550, 100 mm wider than the original that allows for the increased radius track from 28 to 32." minimum radius, it also is where the depot is located, and my decision to get it up first is the best option for me.

Since that time, I lost some interest owing to the other work going on, today however 8th October, I put the extended section in place with Styrofoam set in place for the scenery to go over it., while not a huge job, it was a matter of working up some lost enthusiasm to restart the project.

While the move resulted in most of the items coming through unscathed, sadly the roundhouse suffered a wall breakage that will need a rebuild, not really looking forward to it but it has to happen, With it down I also noticed some of the styrene inserts in the flooring between the roads had bowed upwards, which meant some cutting down of the styrene edges, once the structure if fixed and the styrene painted it wont be seen hopefully.

One of the areas on old Essence that annoyed me as it did not look quite right was with the corners of the layout, being in a 6x6metre garage, the four primary cut corners, along with other largish supports in the middle of each wall, to me really made the layout look too sharp or something that I could never apply a right name for it.  Having one wall behind Moblayne with a commercial back drop, at one end the square cut corner finished nicely and I did my own acrylic painting on the extended side. Behind the loco depot it always looked too square, even trees and other areas of scenery to try and hide it barely masked the problem,  As a result I screwed and glued some thin ply and pushed it in to form a concave section to see how that looked, it was a test of patience as I was working on the top of the layout with foam and blankets over the tracks to prevent damage.  A lot of time was spent on it and I admit to being pleased with the results.  Other areas were not as successful though 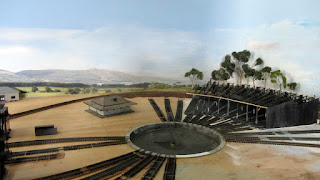 The above photo is early work that shows the curved rather than the sharp angle of that part of the old Essence layout behind Moblayne loco depot.  The following photo's show both one other section that I tried to get a better look along the side wall leading from Moyblayne to Akuna township. Its a slight improvement over the squared off beam but still ugly from my perspective.  Thankfully this will not be part of the new Essence, however, where that beam is, on new Essence there is a window meaning less backdrop, the same will apply to the rear of Moyblayne.

The below photo is of the section that runs from Moblayne to Akuna, the obvious issue is the middle purlon that is around 25c, on both sides of the garage, to say they are ugly is an understatement, even with the MDF concaved cannot hide them.  The new layout will pretty well be the same, as well as the staging yard underneath, I have already taken the bits of plaster hills off that part of the section and filled the cut out where the purlon cut in, allows for a bit more and better scenery for that section. Other thing will be the aspect that with large windows the layout will come in only around 100mm under the window frame so minimal backdrops for those spots. 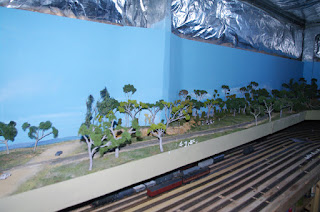 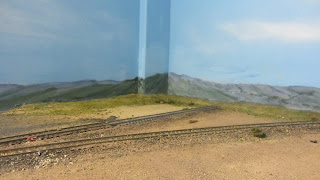 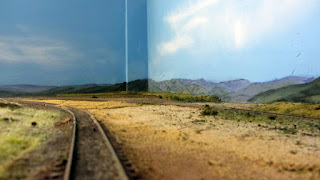 The above two photo's show the Akuna up end with the corner section being painted over, its not as bad as the middle areas, the pics are from early days, the top one shows the two oil sidings, with     the bottom one showing what was a road to a stock siding which may not be part of the future Essence as the entry to the room will be on the right hand side of this wall, to the right is the main line that goes down and around to the peninsular section and the crossing loop at Nullo Mountain, a timber siding is situated off the loop and will be interesting for some operators as to how they will work out how they will shunt to the siding.

The photo below is at the down end of Akuna along the wall from Moyblayne, the main is to the right and the track to the left is the silo road. That corner is covered up by trees and does not look that bad but like each corner on new Essence there will be curved backdrop fitted to take the sharp angle out. 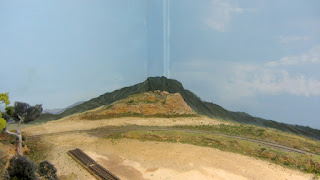 Finally below is the opposite side of the garage showing the mid point purlon. very hard trying to make it even as obscure as the other side, but with trees in place it covers things to a degree. The tunnel mouth is the track that comes down from Akuna and into Nullo Mountain staff section and where the timber mill is situated, 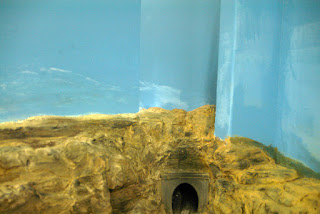 .
Hopefully in the next week or two I can bring some photo's of the first steps of the new Essence with the beginnings on show albeit small
Posted by Colin Hussey at 22:09