With Christmas now gone, & with other areas of work needing done around the house, not a lot has been going on, well maybe a bit of destruction has taken place in at least one area, owing no small part of dissatisfaction with how aspects of the layout were done in the past.  However with the weather (HEAT) not providing a comfortable work environment in the train room or out in the yard not a lot really has progressed.

After the effort put in to improve Coxes, I really started to take a new look over the remaining areas of the layout, in particular wanting to lift the work I had was doing to a better standard, it was a challenge & as Coxes only needs a small amount of work to finish it off, primarilly to do the water course & just tidy the area up with some structure fittings. To walk away from Coxes & go to Moblayne which has become the main focus for a while, I had to look directly at the section of track that runs up to Akuna along the side wall.

This was pretty well the first & only section that I was happy with especially as it was really pretty well complete, but each time I looked at it I could see shortcommings & problems with the backdrop. I guess its easy to simply hide problems with some scenery such as trees & the like but when one starts to look & not even too closely at this area I realised how poor some of the trees were as they could do with being covered up from sight. Thus stage 2 of horticulture changes began & thats not a bad idea for some sit down work without exerting oneself in this weather.

Along this wall I had not long also added a couple of clouds on the backdrop, as I looked at the work to be done I noticed some white paint overspray on the ground & some trees, which made the job a bit bigger than I had planed on but, it was no great worry as I saw the trees as ones needing work &  some updating as well.  So with all the trees along the section removed I noticed ome run marks on the back drop, being quite noticeable when standing at the layout edge it meant work to rescue that area as well. 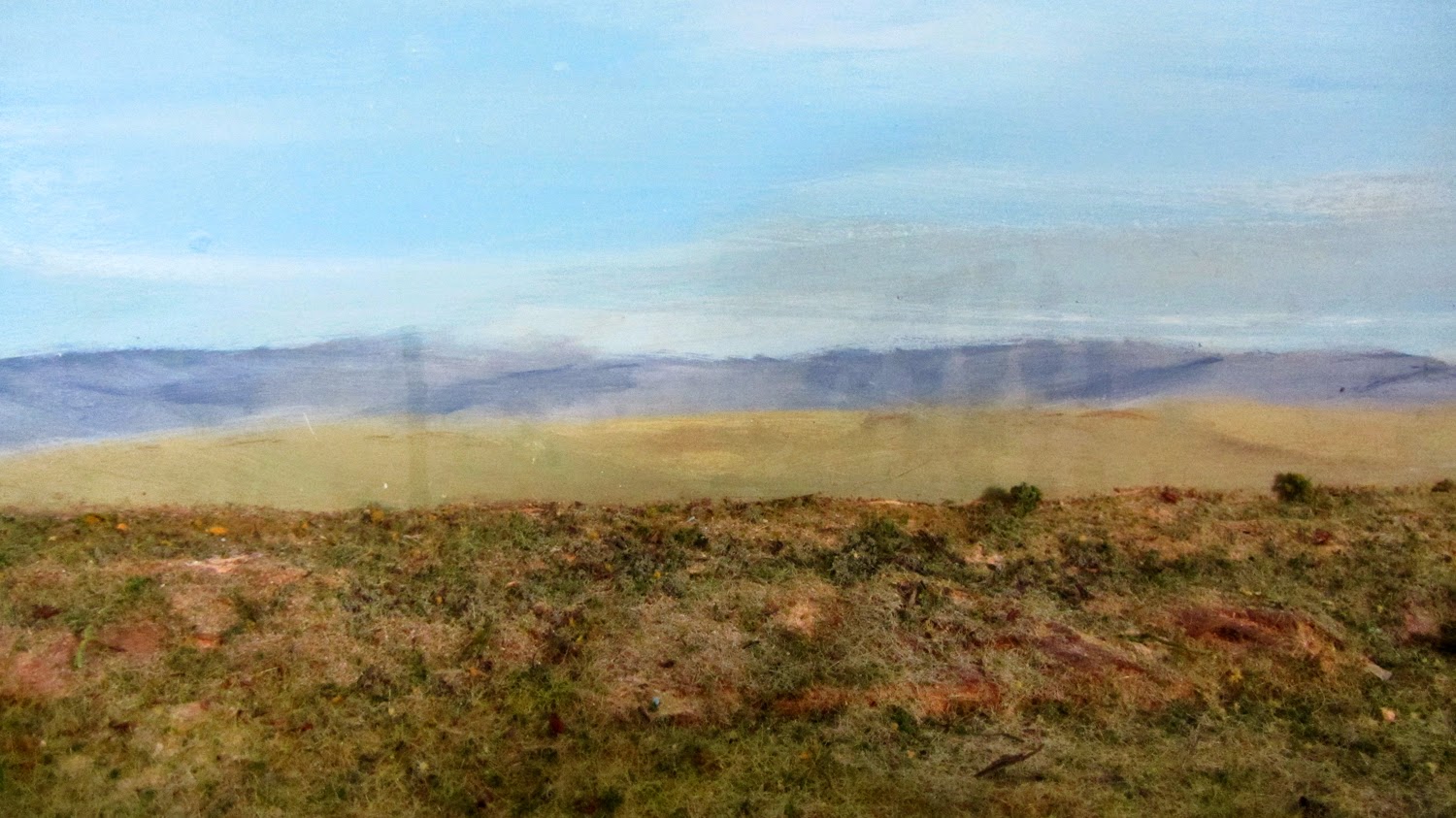 Trees removed & the damaged section of the backdrop,  This clearing up of the area also highlighted the need to also try to improve this whole area as well. 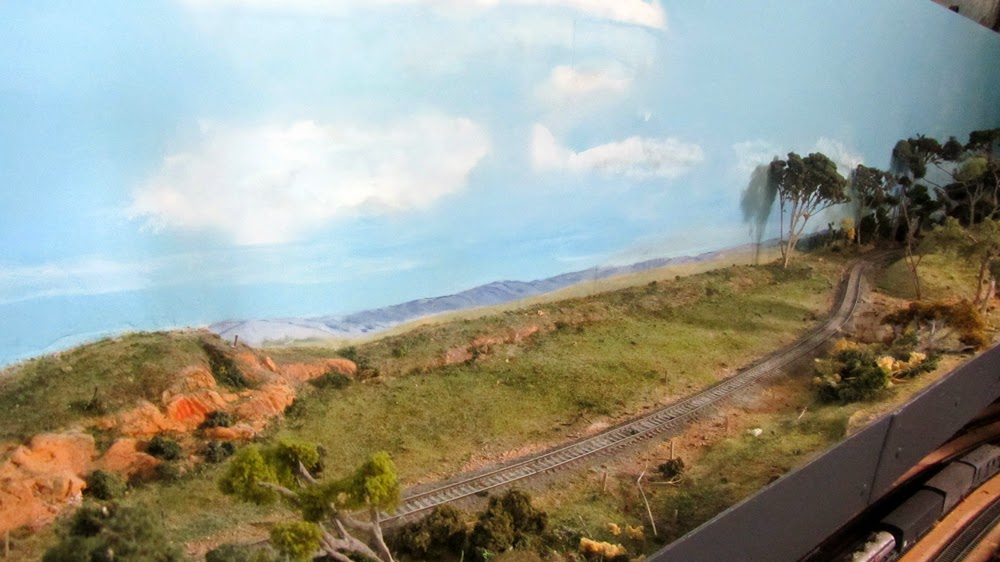 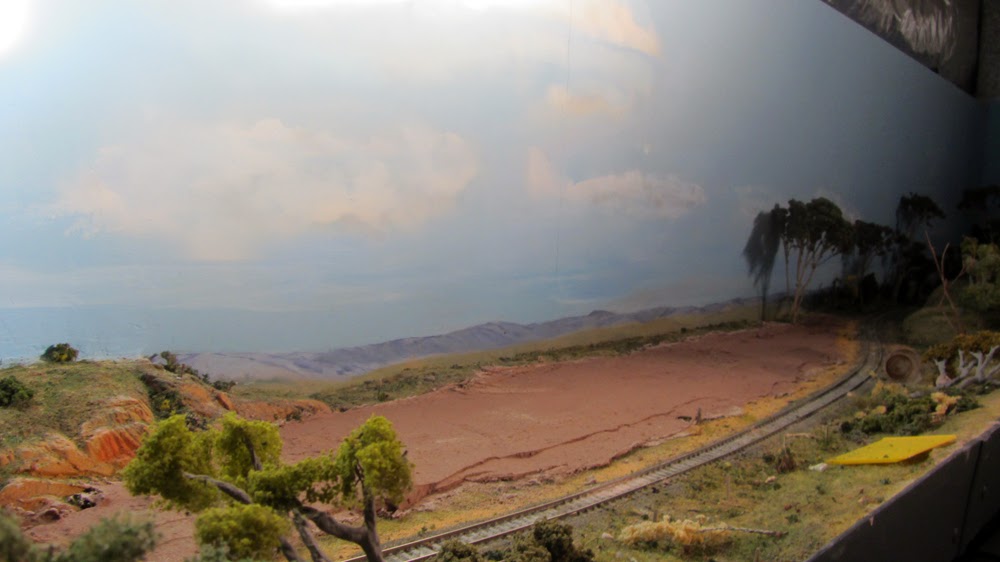 Section to be worked on with trees removed & ground area built up the foreground to a more even level to that of the back.  Next is to redo the grassing & put the fencing back in place.  Above photo is of reworked section awaiting new grass, fences & the like.

New grass applied after a bit more work on the sky, fences & trees still to be added.

My old trees were pretty much a real mish mash of ok & not, those taken down revealed a fair few needed work to bring them up to something a bit better 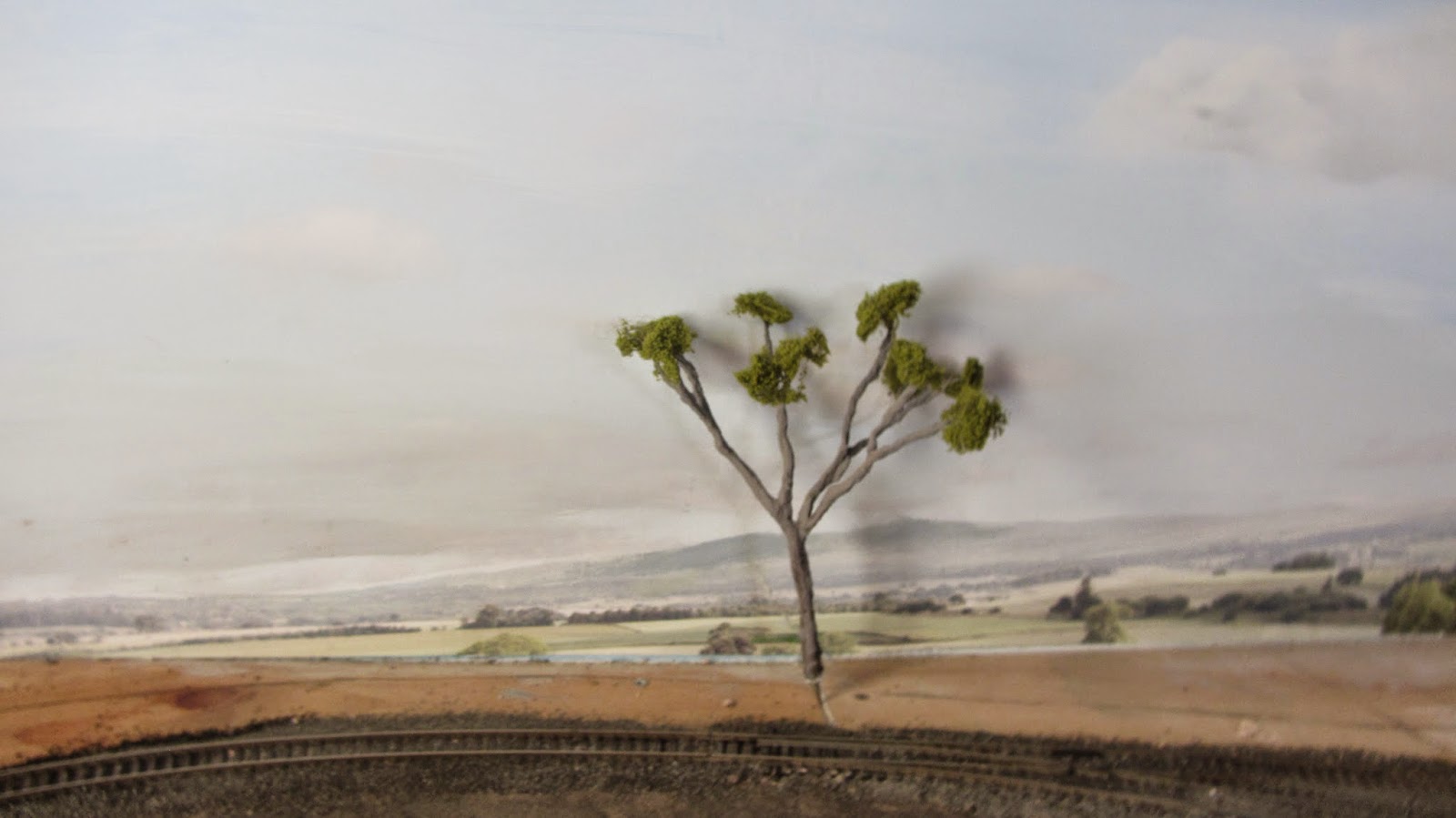 One of the original examples of trees dating back several years with the Hechi MicroFlor netting, that had been hiding in a batch of others along the affected wall, I didn't think anyone could get that stuff looking as bad as this.

Other trees that had to be worked on was those that I had used Micro Mark fibre mesh for the tree coverings. As I come across these trees, I remove the mesh & bin it all, replacing it with Bachmann fibre mesh with more time spent on getting variations in shapes.

Reason I got rid of the Micro Mark mesh was that when using especially craft spray glue, & even hair spray, for the flock both reacted with the mesh & shrunk it, leaving the mesh in a tacky & shrunken finish, they were still the same after 2 years, also it did not take either sprays well in regard to holding the flock on. 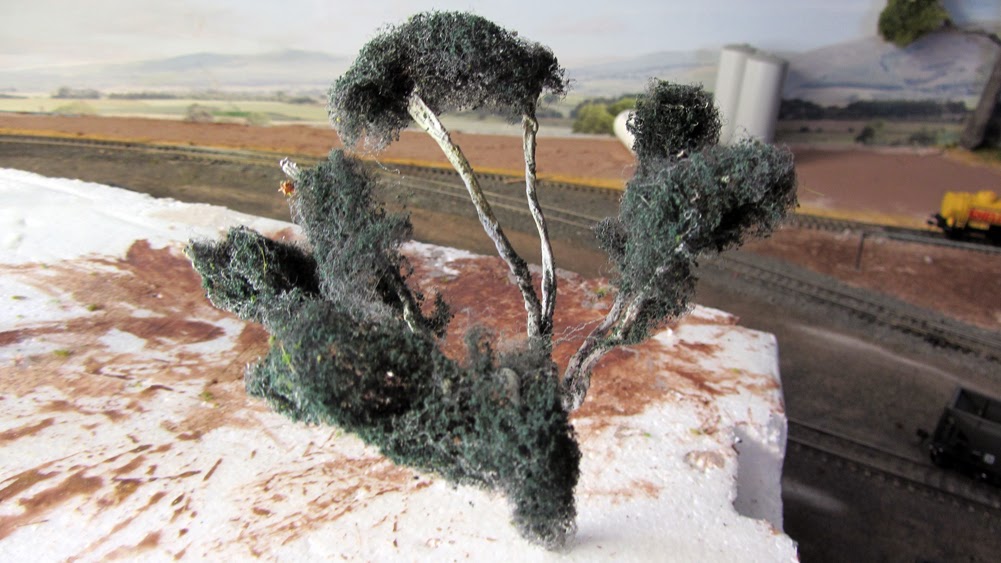 Above showing the Micro Mark fibre, some flock is still attached to it, but the whole of the fibres which had been teased out quite thinly, has shrunk back into a clump like matting that cannot be worked on any more. 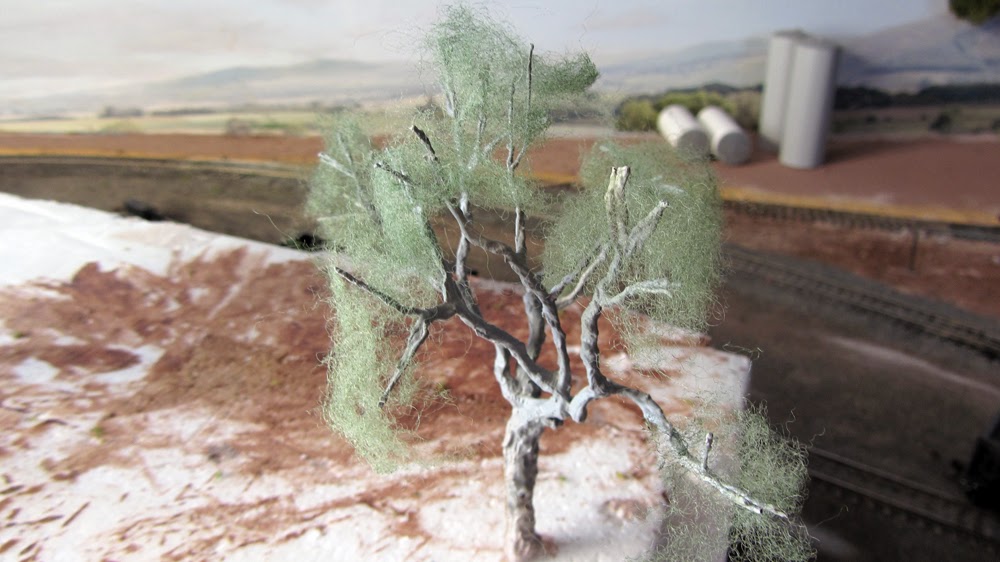 Above shows the Bachmann fibre mesh teased out in the same manner as the Micro Mark item, sprayed with hair spray only & the following is an end result. 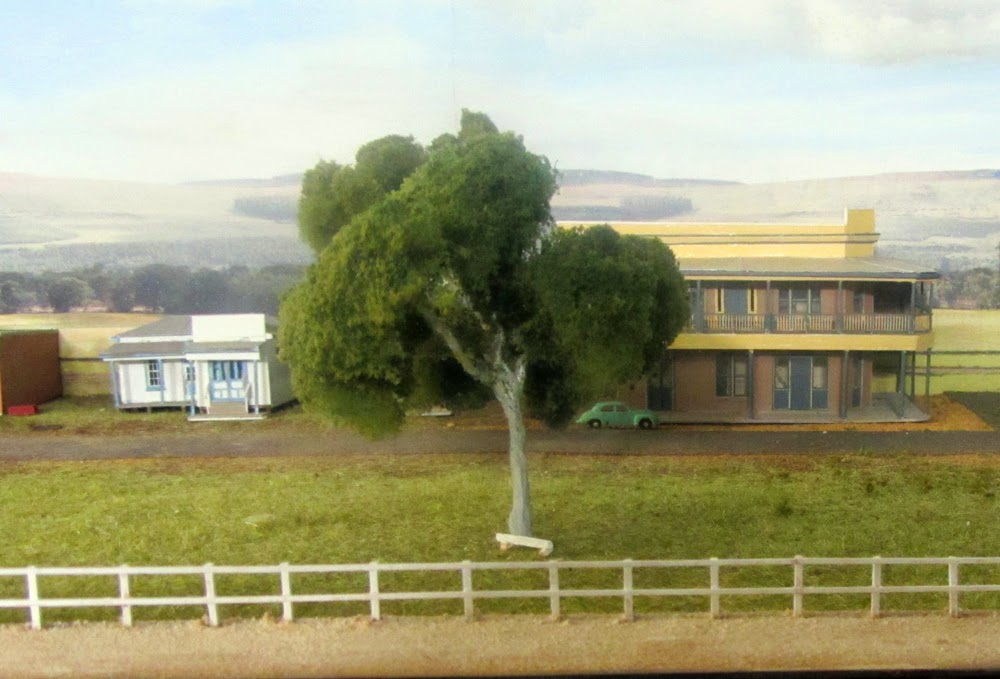 With trees being worked on especially those that I hope will be in more prominent areas on the layout, a fair amount of testing of where to locate them, the following photo's show some end results of the reworked trees & positions they are likely to remain in. 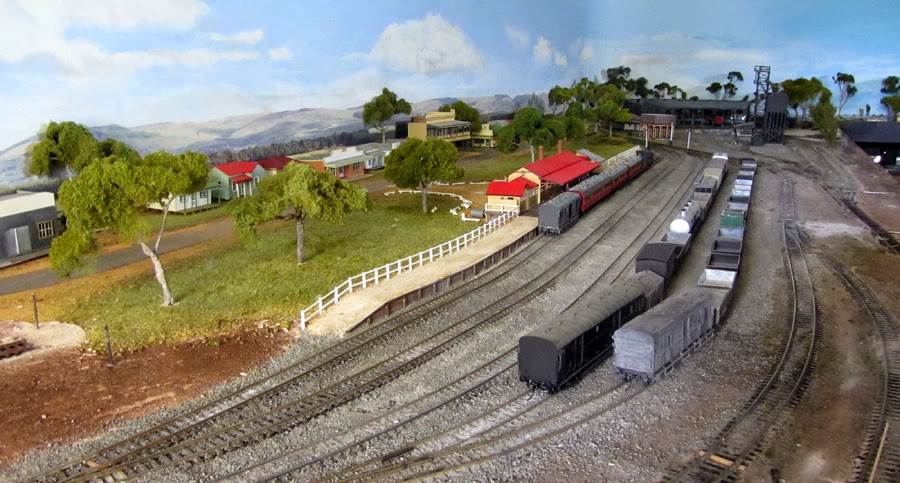 The station area is an attempt to provide an example that tyified many rural locations, that had a main street & shops on one side then a parkland outside the station, trees provided relieving summer shade on hot days, sometimes closely planted sometimes not. I am still to decide if more are needed. 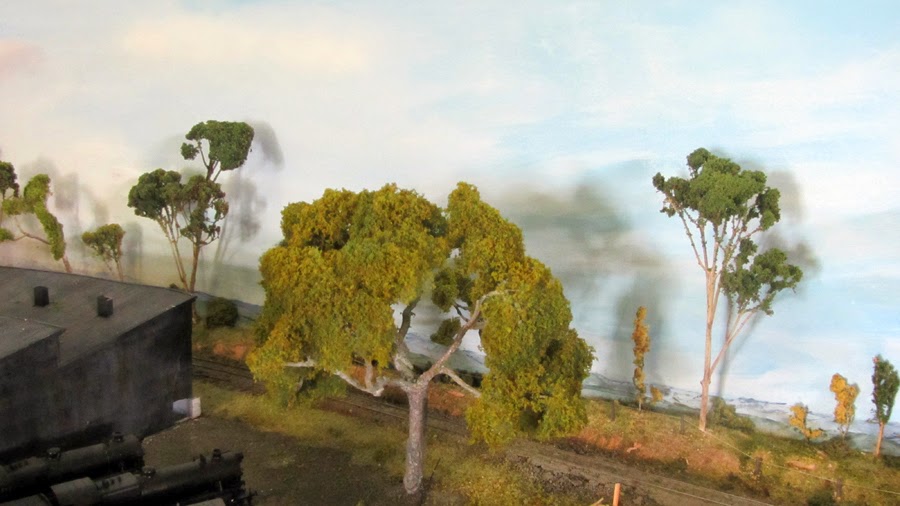 Behind Moblayne loco depot are some early attempts of glueing together some old Sedum flower stems. While Sedums do provide a fairly natural looking high style of Eucolyptus trees, not all were just top clustered with leaves.  The two on show are the first attempts, slicing thin basically useless single stems to the side of a main truck provides a different & I think more natural or true example of how many Eucalypts look. 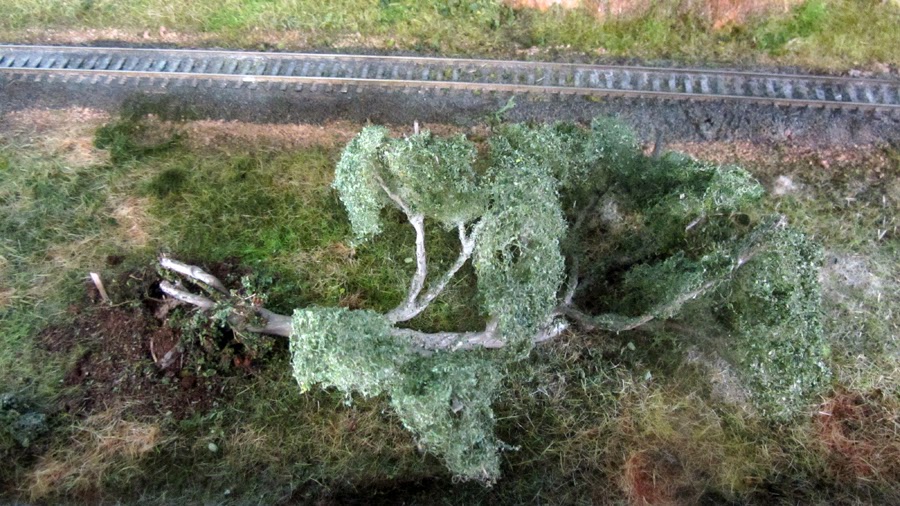 Fallen trees were often part of the scene, the roots sticking in the air with a couple left in ground providing life support for the tree. This tree uses some of the expensive Polac leaves which are a nice example for some types of wattle trees. 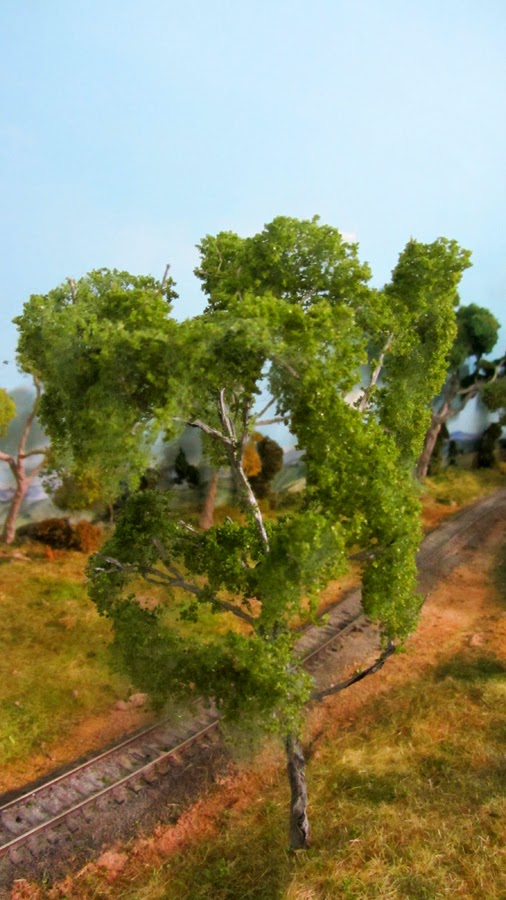 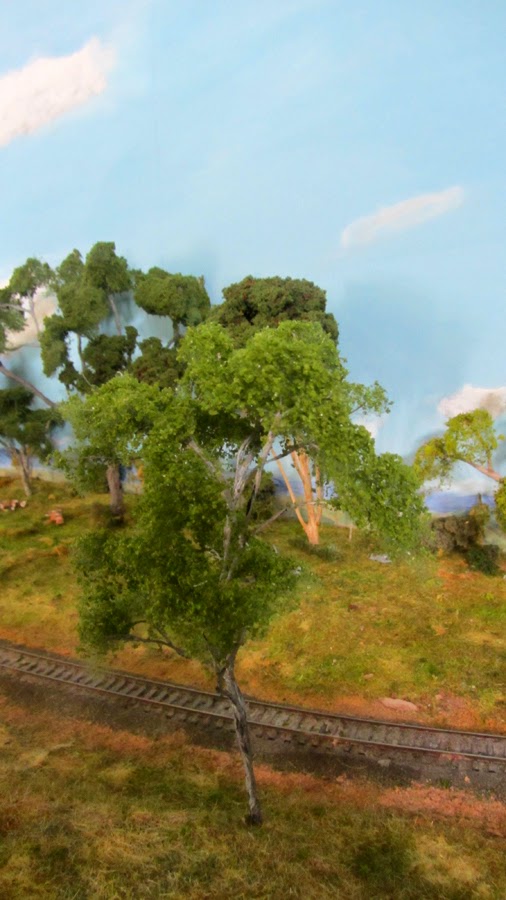 Two photo's of probably my most ambitious project so far.  The copper wire I have used for a while now has been very thing & readily gets tangled & bits get pulled out, unlike the thicker trunked fallen wattle in previous photo, many wattles were quite straggly trees & only the leaves & flowers provided a decent looking tree.  I decided to try & do some artwork with the thin wires by twisting together many of the loose strands, soldering in key points for strength, also cutting off arms for lower branches then soldering in a longer top section while leaving the wires basically limp.

The big challenge was applying the no more gaps covering especially on those top single strand areas. Two coats above the main lower trunk was sufficient, & the lower trunk had 5 staged coverings.  Painted using Sonja's Nimbus grey & then thin rough strips of black prior to the leafs being applied.

I have used a relatively new product I discovered on the Scenic Express webb site called Super Leaf http://www.sceneryexpress.com/SuperLeaf/products/1289/  These leafs are basically identical to the previously used Polac leaf material & a fraction of the price.  The covering using the cheapest hair spray as glue was accomplished with 2 covers.

Even though cheaper than the Polac leaves, I always have a plastic washing dish under the trees as I shake the tree materials on tot he branches.