Since the last post there has been slow yet steady progress on the layout to which I am quite happy with, much of Moblayne has been completed, the lighting in the roundhouse has received a boost by a simple change to the LED strip lights. Previously I had run 2 sets cut from some Ebay Chines 5 metre warm white strip lights, which were too bright, attempts to cover over the LEDs to dull was not satisfactory, so I bit the bullet & ripped them both out.  The fact that the lights for some reason decided to die on me made it an easy decision.

I replaced the strips with identical ones but placed under the trusses along the rear section & just to the front of the shutes. Prior to resoldering the wires to the bus wires I soldered a 1k resistor to the positive lead as a test, & it really dropped the intensity of the lights. The strip lights have a built in resistor for each 3 LED's while ok for room lighting, they needed to be dulled further, this simple addition has brought the lighting down to a very nice light affect.

When I started the layout, & that was way back in Sydney, I sat down & worked out a program of train running & rostering, & came up with a set of numbers regarding both passenger & goods rolling stock that I thought I needed, along with the loco's to run them, the list was long & it certainly meant I needed to budget tightly & save well to achieve it.

One major thing I decided on was to severelly restrict what I purchased, the only way that could be possible was to restrict very much the era/time frame of what I wanted to model & accomplish. Initially I thought a mid 60's transition period but ruled that out pretty early as it meant I was open to many more temptations than I wanted. My period was set very tight into a 1955/56 period, but as things happen I have slightly extended it to 1954 - 57, it allows for a wider range of models & temptations to take over.  That's not to say that I have had to resist very hard in purchasing some models that cover a later period, should I surrender to that.  Hard decisions? Yes but I think worth it.

As I work on the layout, I usually also am reflecting on what I am doing & trying to achieve with Essence, this often includes thinking on where the hobby is heading. During one period where I found the need to stop actual work on the layout, with other pressing needs  & made me reasses much of what I was doing. This personal reflecting primarilly centred on the amount of train models that I have & was looking at for the future, this led me to do a stock take of all the train type models, that I have, also the few that I have on order.

This reassesment has actually been ongoing & one that I shared with some modelling freinds which led to some various comments & to a degree how they were also thinking of things as well. It was therefore of interest to read Comment column from Bob Gallagher in the latest AMRM. What Bob has said in that editorial is pretty well smack bang on what I have looked at & spoken of for some time now.  Following the stocktake of models, & the recording of them in what is R/S registry basically confirmed to me that with what I have already, I can really operate & do all I intended to do in the first place with what I already have, in other words I now have no real needs for anything else, especially once the long awaited orders eventually get here.

So what of the future & what it means for me, what purchases do I look at? Wants? well they are always there but, they will be carefully assesed by what I can afford & save for.  If I was to roll over into the needs area, I would put that down to the operating arena only rather than scene making items, which I can build as time goes on & when the time permits, & in the end there's not that many that I have to have, maybe its just time to finish what's been started.

My passion for the layout & operations is defined by those early transition period trains & older infrastructure all or most of which has dissapeared from todays scene.  The variations of how a goods train looked is quite incredible, no matter the length or type of train, exception perhaps was with the block wheat or coal trains, but even in those areas were variations, mixed or a complete train of RU's, along with tarped BCH, & BWH hoppers.  RTC or fuel trains were not always in a full load consist, except the occasional empties returning behind a single steam locomotive.

Wool being a vital commodity & often near full loads were seen, interestingly though is that while all wagons were tarped often only a few wagons on the train looked the same.  Other open wagon trains were broken up in appearances with flat wagons, or the RTC's in the consist, & how many of those trains did not have 4 wheel stock wagons in them?

Those images are the main aspect of what I am after, therefore as new items of R/S arrives I can carefully or not, select models that will fill the bill towards variety, & I acknowledge there are several that I await I am also aware that some may not arrive except in kit form, but that's fine & ensures I will be able to keep busy as I add them to the not too full box I have.

As for locomotives, the old list had several freighters listed along with others, which would total an old need of 10 more to purchase.  I admit to one thing & that is I would really love to get those models, & if it was possible I would likely do so, however I very much doubt it even if they all get here while I am still here & able to enjoy them, to which I hope I am wrong.

If nothing else, I sense price will alsp determine a lot of things, yet when I look back on my first NSW model, a 1st run Dockyard 38cl which set me back the equivelant $58.00, which was also $10.00 more than my first NSWGR take home wage for working 12 days in that fortnight, the modern day modeller with diesels now over $300.00 each, is below the minimum weekly wage of today. Although that is also countered to an extent by the reduction in buying power of our $$ in the shrinking packages that seem to be ever on the increase.

So, with all that, I plug on enjoying what I do & continue the work on Essence, since the last post & more especially the last week has seen a bit of finishing off of some areas getting ready for the next group meeting here on the 3rd of this month, as well as building the base board area for the last section of the layout.  Moblayne abatoirs & stockyards, which sits in a corner just under the down end of Nullo Mountain, & to the side of the down approach rails to Moblayne. 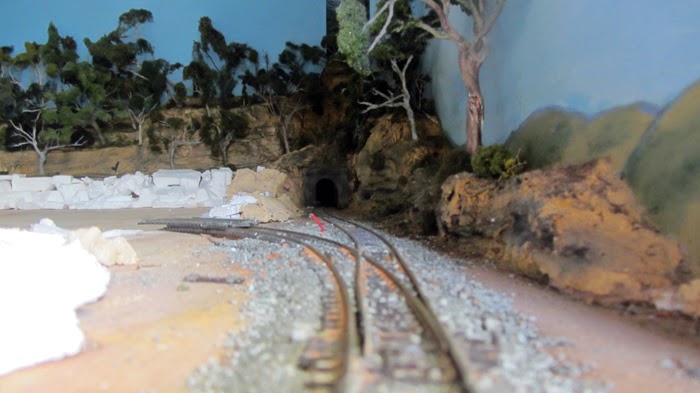 The points in position for the abatoirs, an outer home signal will be placed short of the points to protect the siding from through trains.

Baseboard in place & the styrofoam cut up & glued to the side of the Main line area of Nullo Mountain. 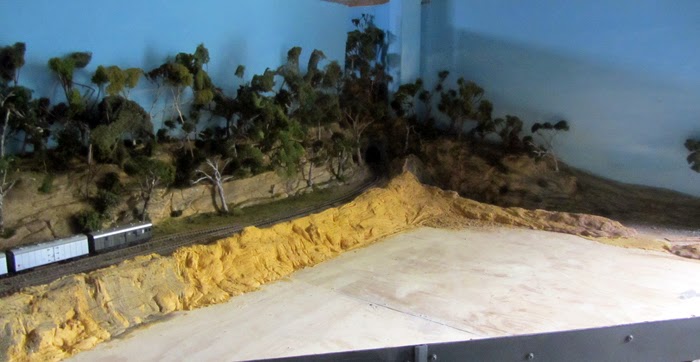 Next, the cornice cement mix has been put into place, I use some brickies mortar colouring, then apply a very light wash of black tube acrylic paint at the top & then spray with water to allow the black to run into the crevices. 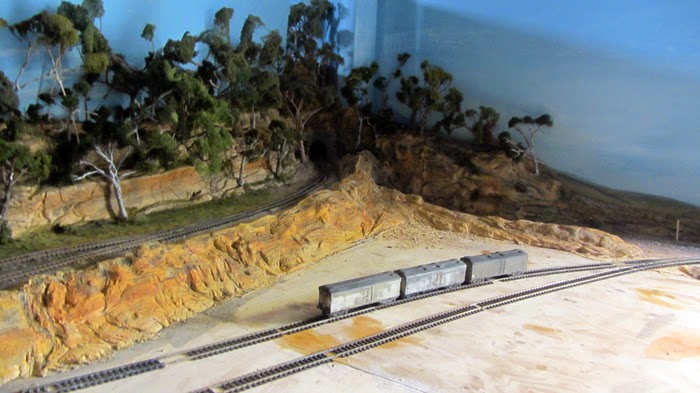