After months of work the Moblayne R/H is in place, albeit not totally as its still just sitting there, & with some minor adjustments to be done to the internal lighting, that will stay as is for the time being, the only other things needed for completion is smoke shute covers, & external lights to the outside of the shed, 5 in total.

In the end I had to do some timber removals as I really felt that having the roof battons served no useful benefit anyway, so they came off. 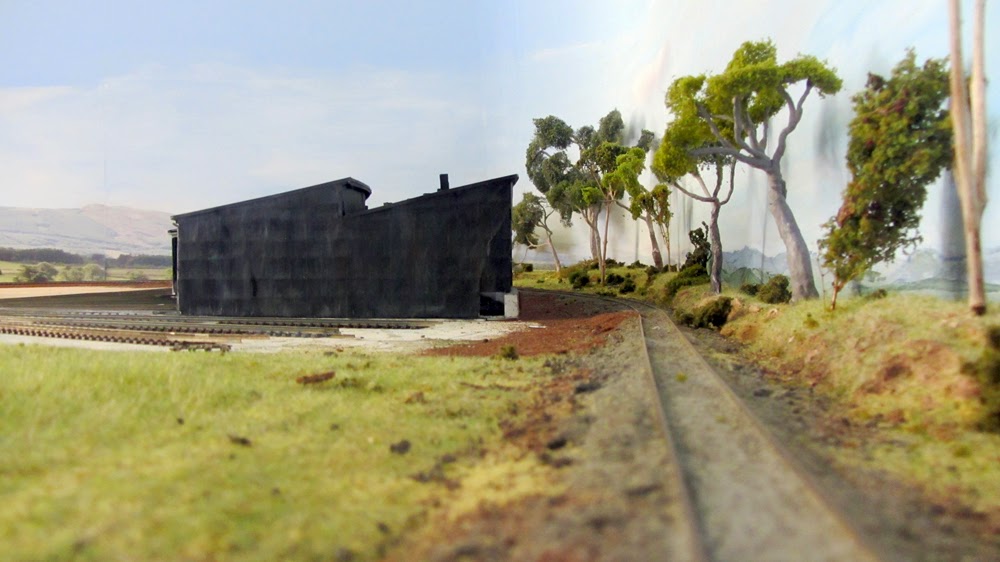 Down  approach to Moyblayne approximate location of the distant signal, just past garage shown on previous photo. 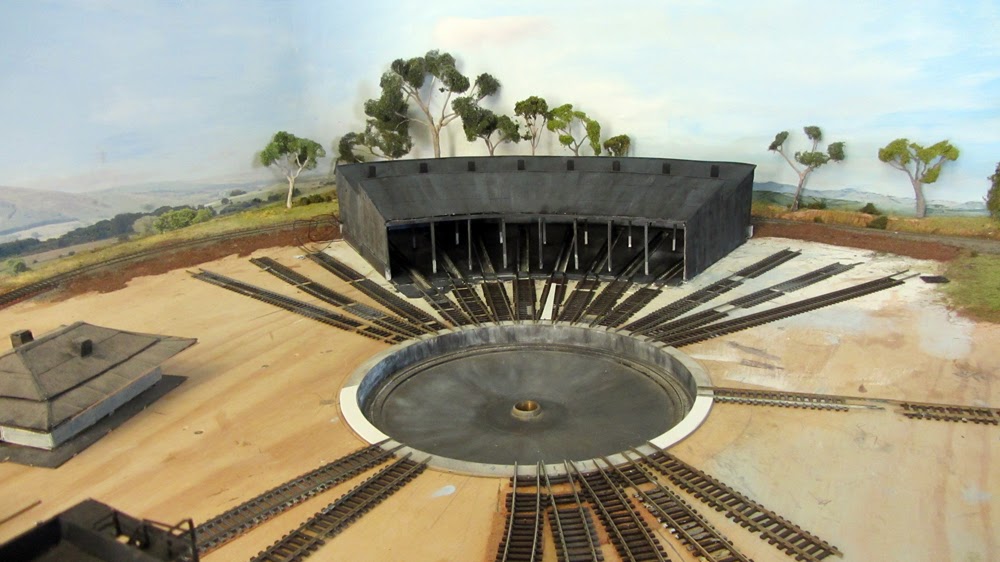 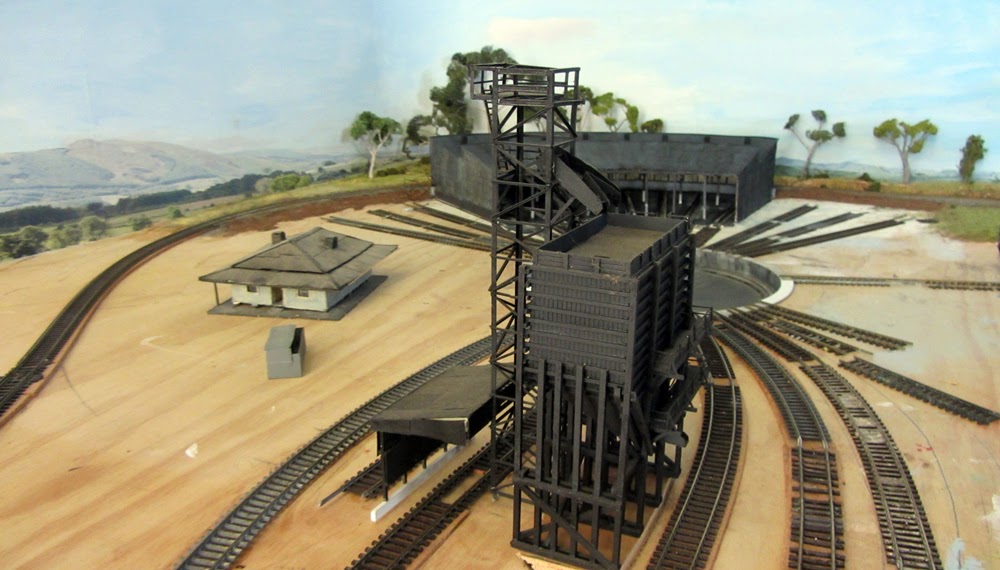 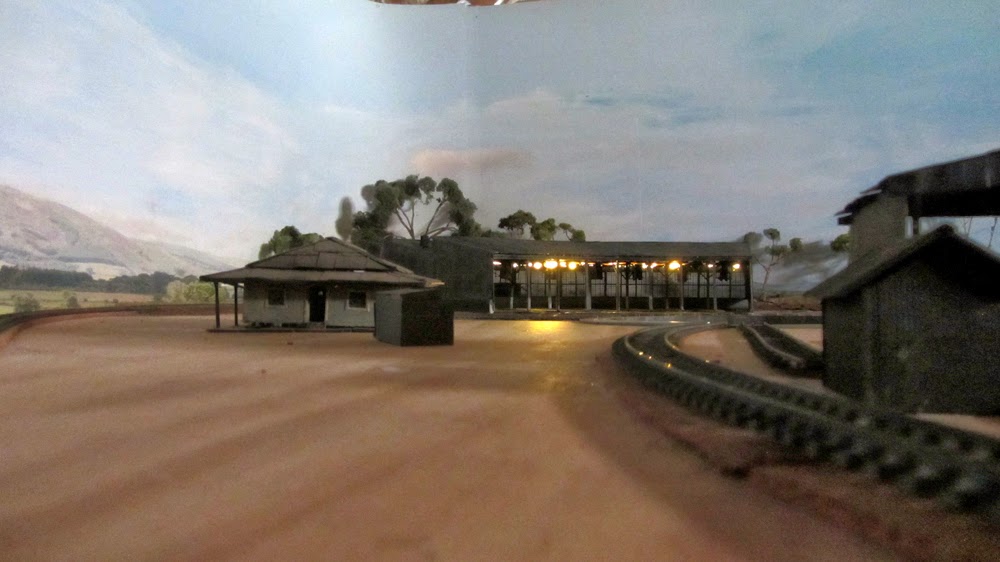 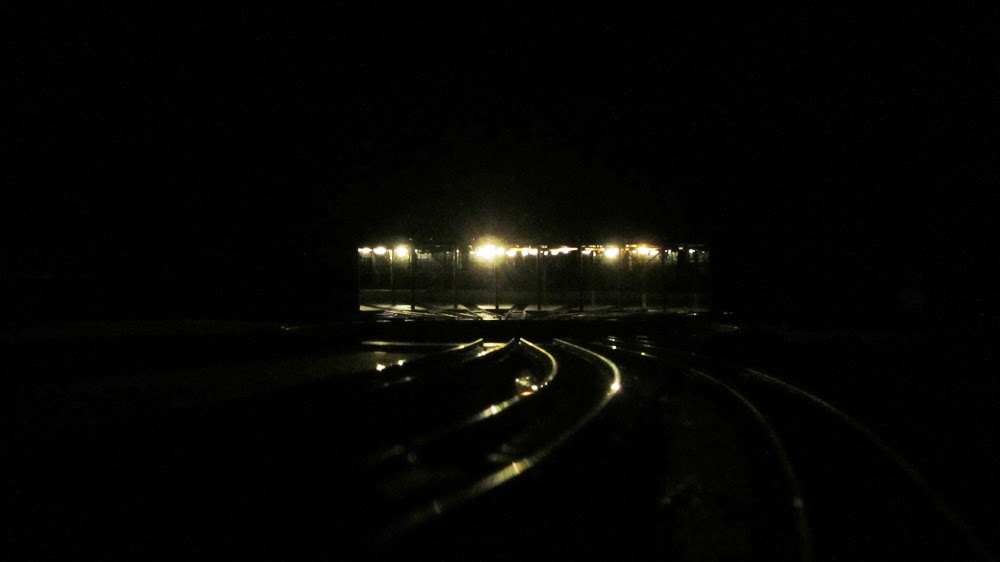 There are some lights too bright which will be fixed, although they look brighter in photo's rather than real life although I will try to bring the levels down. 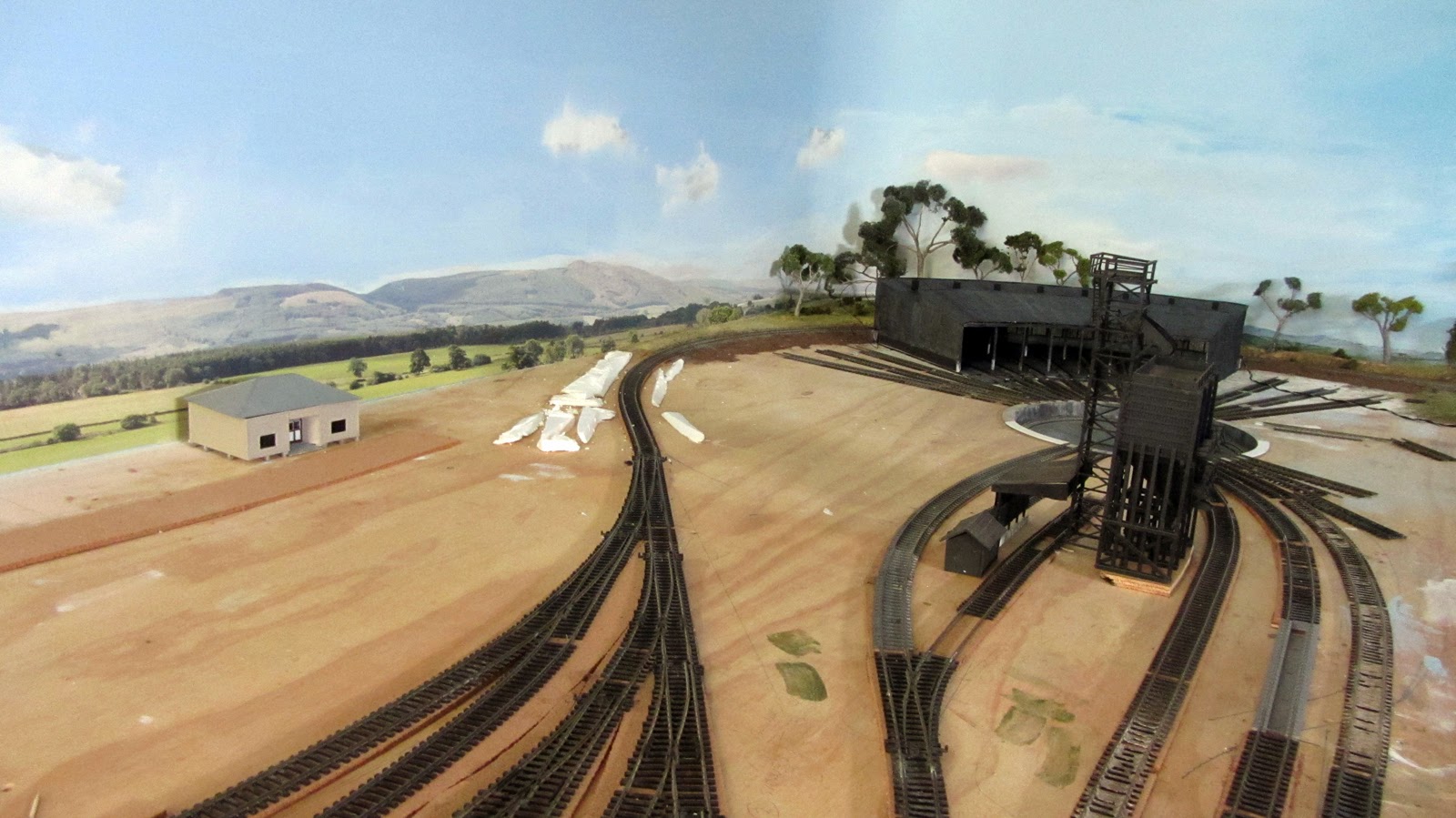 Using cut up pieces of Styrofoam boxes to form low embankment from road to trackside. Short cut out is road access into depot Home signal to be located just past the crossing.

The above 3 pics show my first real attempts at clouds, while generally happy with the result the large on the left is not to my liking so an attempt will be made to alter it. The work on the clouds has helped to try & cover some problems previously mentioned with the backdrop which has been primarily caused by the active clay region we live in, dry weather cracks appear, wet & the cracks close up & now they push together forming ridges, nothing really can be done, so its live with it & try some different things to cover up the imperfections.

Primary through main road is in place the next steps will include road base to go in place with dirt. With this section on the move now, the finishing of the pub along with other buildings  will take place.
Last but certainly not least.   One item that I had been eagerly waiting for was the platform for the Coxes Gully goods shed, it was a real pleasure to receive if from Rod Kelly on Monday just gone, along with his wheel painting device & another water tank stand, the main truss part of the stand was cut out that night, & now ready for assembling, this leaves one more stand that is needed.

I say a real pleasure to receive the platform as I looked over it, & while the detail is superb, the actual assembling of it by Rod is absolutely top rate, a real pro's work indeed.

As I looked at it & put the Ian Lyndsay building on it, I thought that it actually needs to be eventually situated elsewhere & it will end up in the Moblayne goods yard, I will scratch build a G1b goods shed for Coxes as it would be a more suitable size for this location.

A real appreciation of work indeed & many thanks Rod. 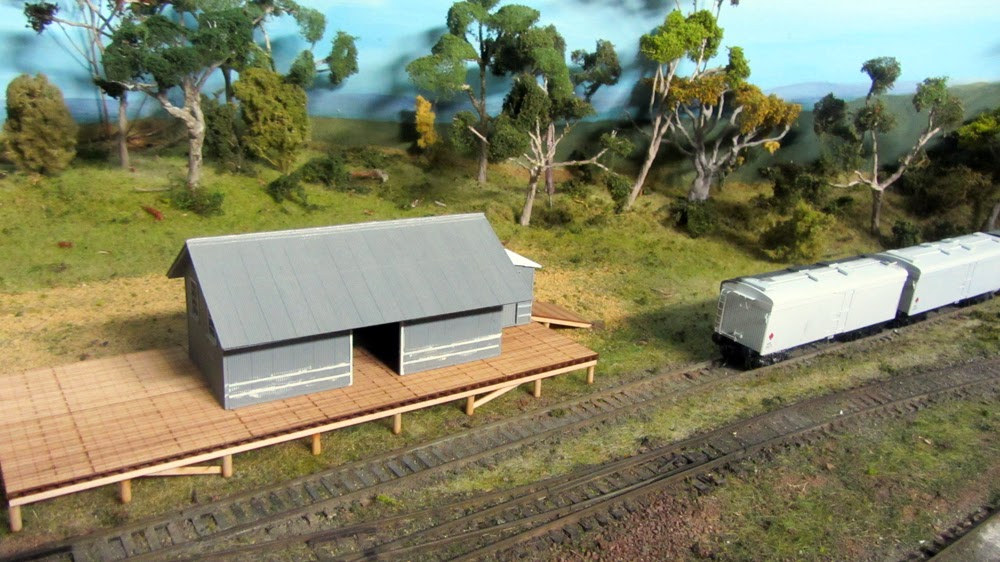 The timber platform with Ian lyndsay shed on it. The 2 MRC's are the latest run from TOR. Still the same body but the additional items of detail improves the look, the worst is still the timbers which are a bit too heavy & deep, also the paints pretty heavily gloss.
﻿ 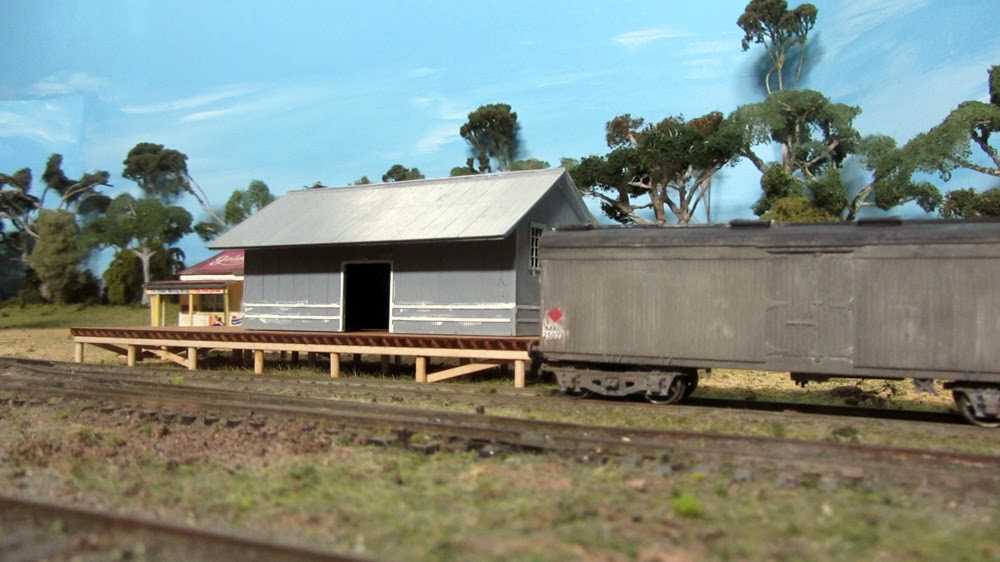 The worst aspect I find with weathering models factory painted is getting chalks & powders to stick, I have a steel Scratch brush from Walthers a $4.95 investment that I love, the first photo shows one side with original paint & condition, above photo, shows the platform from Harlow graphics also my weathering of the other side of the MRC after using the scratch brush to take back the paint, & apply the chalks 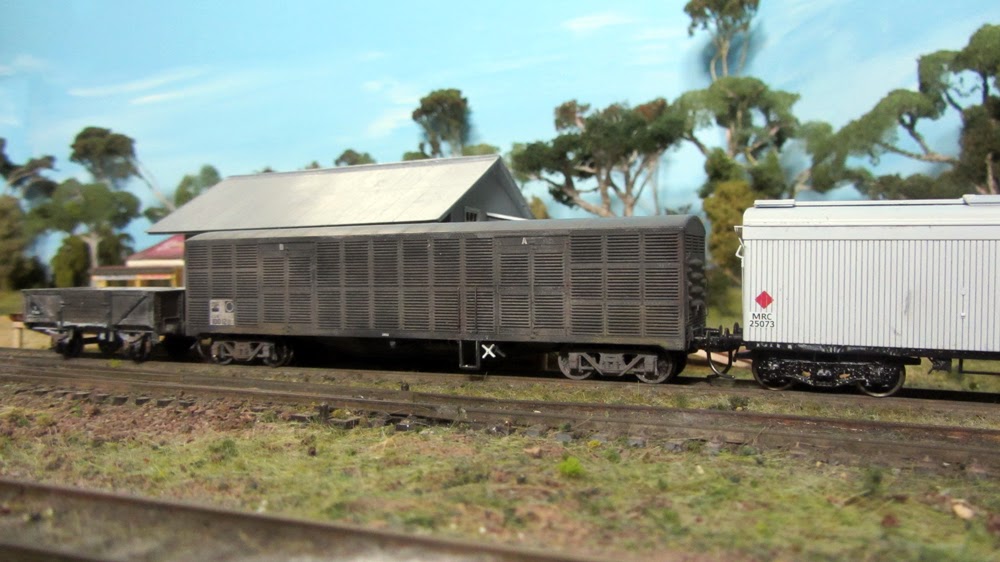 An OTM latest ﻿run LLV, sits next to the MRC, this has been weathered slightly with the scratch brush, & some chalks on the scratch brush, bogies are painted using Sonja's Nimbus grey as undercoat & chalks on top.
I have found the MRC wheels to be slightly too thick, & bind on my 1:40 grade with 28" radius curves that also has some super elevation on them, replacing the wheels with 100 wheels from TOR, improves them no end. In the AMRM review mention was made about the wheels supplied with the models being not what was ordered, sadly some more issues with China factories.  I could not work out why the binding too place until I did a back to back measurement of the actual wheel, which revealed the ones on my 2 models were closer to 0.114 than 0.110, shows how much affect a near 1mm oversize of 2 wheels has an impact, as the models ran freely with the wrongly supplied wheels on straight track & likely larger radius curves but with the narrower wheels they run as well as any other wagon on my layout.
Posted by Colin Hussey at 22:03