During idle/wait times with the RH I have taken the chance to look at some other areas that are needed to be done, one of those is with my Rolling stock.  While I have a few kits, much or really most of my R/S are RTR models that have been collected over the years, what is very obvious is the change in the overall levels of detail on them, I could use the term quality but that is a term that I would prefer to leave alone as every person has their own view on what we receive these days, & being perfectly honest I believe a lot of them, leave a bit to be desired, some more so than others.

My chief desire is to have a layout operating that is representing an era in the NSWGR, its not a replica of any place or the like, & while I admit to my little areas of being pedantic, I am a bit forgiving in others, allowing for a bit more fudging in them. So in one of the recent idle times I was going through my box of RTR goods rolling stock & the smallish collection of some S & K trucks, with a couple of exceptions they are RTR versions of the old Austrains brand, now belonging to TOR.

Sometime soon the new Ultimate S truck from Austrains, is supposed to arrive &, I wonder what this model will actually be like compared to the others & at what price? The models I have in kit form are old Bergs models, dating from the 60's with a price tag of $6.50 on the bag, a Callipari model from around the same time with the cost IIRC of around the same price.  I actually shudder when I look at what we got back then, the Bergs bag comprised of 4 sides & a floor, which I never got to fit without cutting the sides down in length, & was baffled at the ends with some weird casting, which I supposed was to replicate the fixture for a hook coupling, the sole bars never seemed to sit square, & these days only bits remain of them, A K truck has the same coupler set up & the same problem with the sole bars & W iron parts that are bowed in one end & out the other. Now $6.50 was not cheap back then, especially as there were couplers & wheels to buy, & that was the same with the Callipari version, although later some ordinary plastic wheel sets came with them.

At least those went together well, & 2 still remain. The Bergs K truck has an old Urethane water tank in it & the side doors removed to be for filling lineside fettlers tanks, how that can happen is beyond me, owing to the contortioned W irons, & finding wheels to sit in them.

The 2 S truck kits along with the Austrains RTR are each of the same type, of which I understand there were a couple of different type S trucks were in service, that basically had different sides/doors to them, I guess I am hoping that the Ultimates will come out as one that is of the different door design than those already on the market. A reference in last years AMRM mentions TOR are rerunning the old Austrains types again, but we wait & see what mods are done to them when they arrive.

The thing is though, if these new releases, that is the TOR Rerun, & Ultimate are the same as those already done, I wonder at what value or price point they will be at, & are they going to be worthy replacements or additions to the old kits & RTR models?  In the interlude times with the Round House, I found I had 22 of the Austrains K trucks, getting them out, the glaring issues with them is the side doors with the ultra sharp & pronounced diamonds on them, the blob that is the hand brake casting, along with the thick side walls, & no internal wall detail.

Looking at the RTR S trucks the same thing shows up with them, although the side walls lack internal detail they are actually slightly thinner than the Callipari kits, whereas the Bergs kit is quite thin & brittle, ok they are now around 55+ years old so what do we expect?  I guess if one had the money & the ultimate turns out simply, well the ultimate I could stick them on ebay & hope they are worth something, or try to fix them up, & the same applies with the K.

The hardest part with both of them is the inner detail, but as most general goods trains even in the 60's had loading of some kind in both directions in these wagons, making loads or covering them with tarps can fix that problem, the hand brake can be replaced with some commercial products that will lift them ok.  Spoked wheels can be added to backdate them, & weathering helps on them as well.

The K truck is another matter, especially with the thick gunwale, & sharp diamond pattern to the doors. With only 22 in my current possession, I found one that I had tried working on some 10 years ago, a crude attempt to thin down the sides, looking at that work, I could see the potential in it, likewise the problem with the diamond pressed doors.

Measuring the normal walls at the gunwale section the Austrains K trucks measured 2,37mm thick, measuring the Bergs Kit walls at the same point revealed them to be 1.4mm thick, near enough to 1mm thinner, a lot in a way to try & reduce the sides by.  However, I decided to try & see what I could do with a couple of them & how much I could reduce the sides by, in order to improve the look of them.

Using a sliding box cutter that has the large blades, similar in size to the old Stanley knifes. Sliding out the end of the cutter to a point where I had only enough of the blade sticking out to scrape the sides far enough down but to prevent it from touching the floor which has timber detail, I progressed to tediously scrap away at the sides & see how much I could take away.

The more I took off the more I could feel the side flexing in as I had to hold the wagon tight, with some caution I got the side down at the gunwale position to 1.67 mm. This I considered was far enough to go, especially with the flex & needing to do the other side as well. When scraping away I did so at an angle, meaning the lower part of the side was not touched & the sides actually are angled from about 2mm off the floor to the top of the gunwale.

I then tried the ends, but found the brass grab wires were set into the ends on both sides fairly deep, which meant little thickness removed but the blade section wrecked, leave well enough alone.  The next item was the diamond pressed sides, well external anyway.  The primary problem I found with these was how sharp the ridges of the diamonds actually were, which I thought was the primary issue, a comparison to the same pressings on a Callipari HGM wagon confirmed that opinion.

What I then did was another ultra simple mod, using a curved blade scalpel, I scraped along the top edges in an attempt to just take the edges off. This worked on some but did not seem to work on others, as well, so with them I used a flat ended Stanley hobby file to lightly file the tip ends off.  This worked quite ok & I was happy with the result.

As these models had been weathered pretty badly by me in the past, & found that the paint I had used, (whatever it was) was fairly thick & left a sheen on the models, which like an unpainted new model showed the diamond ridges very prominently, a couple of them however had been weathered differently & were quite gritty, how that was done I have no idea but certainly the diamond tips were not as bad.

Some photo's showing the K wagons both before & after the work to thin down the sides of the K truck to compare, with the weathering they have come up reasonably well, at least for me. 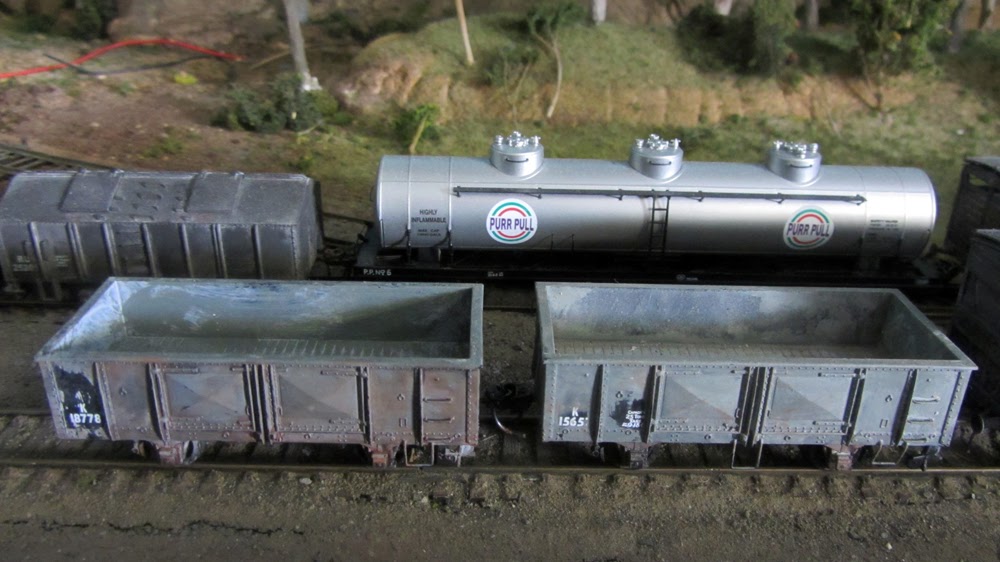 Above showing the Austrains K trucks with old weathering but still showing the sharpness of the Diamond on the doors. 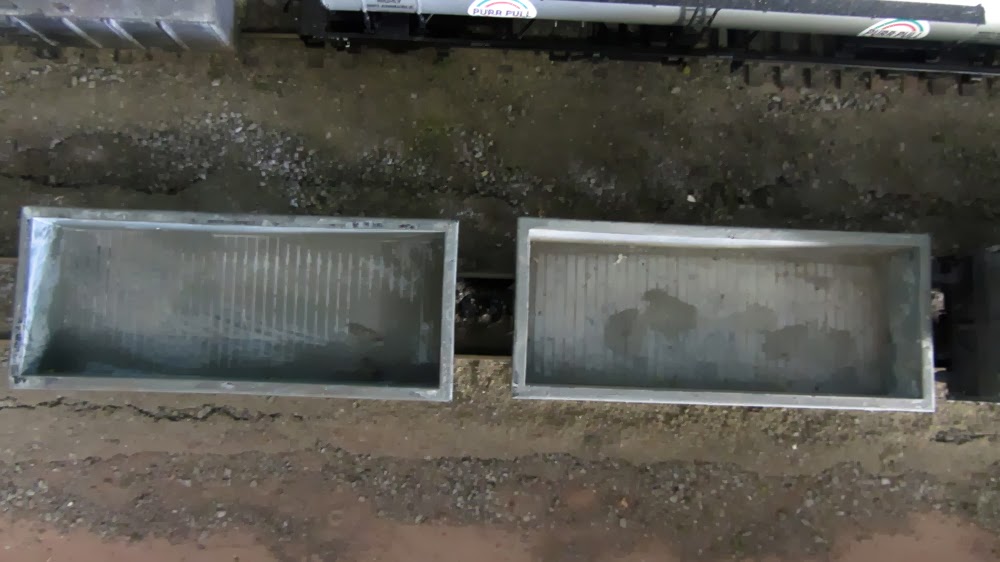 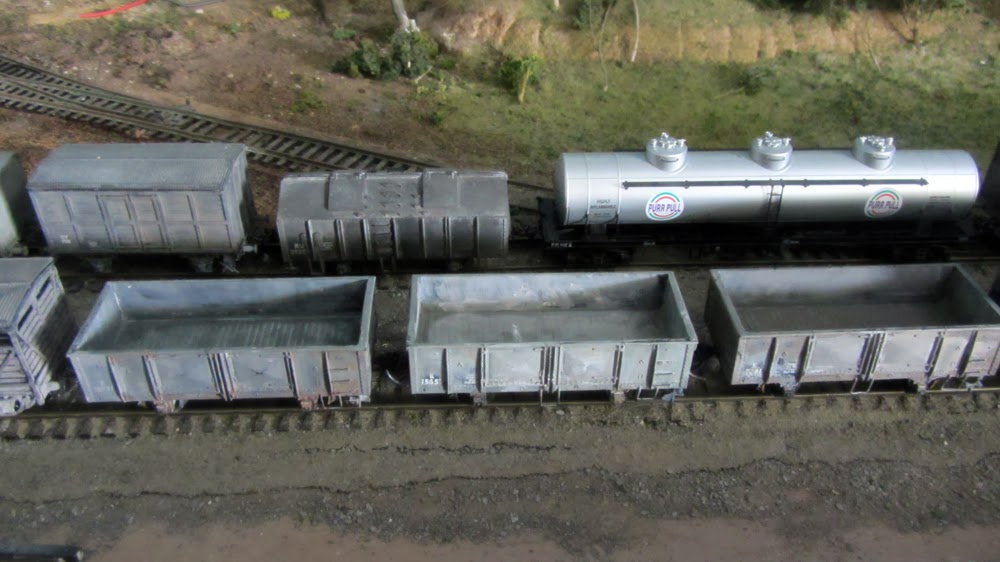 Modified K wagons, showing new weathering, with the diamond sides after the edges were taken off. 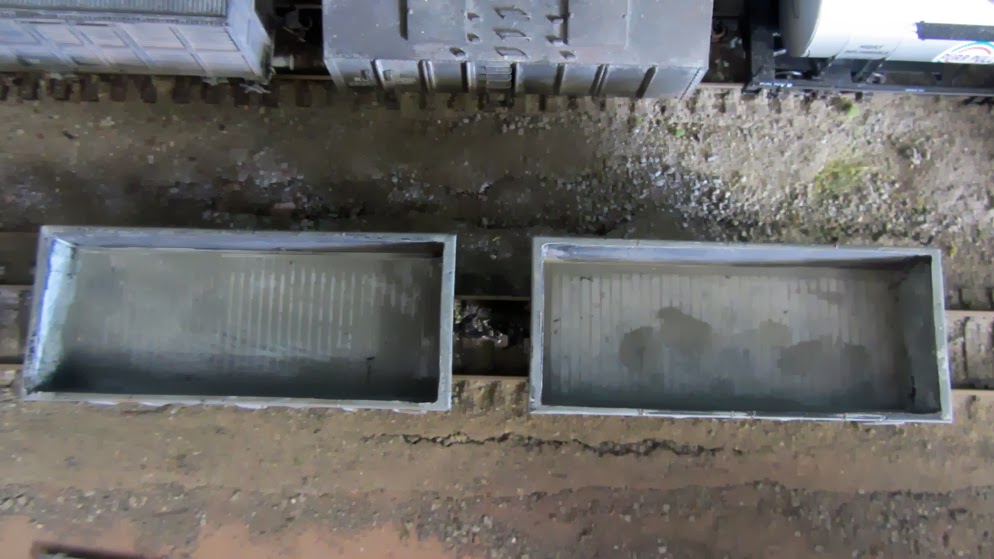 Lastly looking from the top showing the thinned gunwale of 1.87mm thick.
These two simple jobs I believe makes the wagon a lot more appealing, sure it still is lacking but, even on my layout its hard pressed to notice a fully detailed underneath of any models while they are stationary, let alone when passing in a train movement.
Posted by Colin Hussey at 19:50