The last few weeks has been slow for various reasons, as I sort of relax a bit after the concentrated work on the R/H.  The primary model work has been the movement along the backdrop part of Moblayne township, with the main road all but finished along with some scenery at the depot area, & building construction taking place.  Several small houses & shops have been in the process of construction, each a sort of representation of the old weatherboard structures found across NSW.

I am thankful very much for the many journeys around the state going back to my pre teens, taking in some towns that were nothing like they are today, homes on the old party line telephone networks, when truly everyone knew your business as the operators would ring through your phone code for an incoming call along the circuit, & as you picked up the phone to answer, there was the distinct clicks that announced your conversation was being heard by most along the circuit.  Something not able to be modelled though.

But, the thing that stuck out in my mind was as I remembered the towns was just how basic everything was, the reality of how long between painting of houses it was, it was seemingly unusual to see a sparkling freshly painted house, & that really was with good reason, it was a mongrel job to paint those old wooden weatherboards as well as the timber framed windows & doors, likely also the window awnings & brackets, eaves, facia's & gutters back then.

The old paint had to be sanded smooth, patched & bogged up along the many cracks & often a pressure flame burner was needed to remove the old flacking pain then reprimed & sealed. The old lead based enamel paint which required at least 2 coats on top of the previous 2 other primary ones was not that easy, especially as the home owner had likely spent a lot more time at work in often much more physical duties as well. After using a hand push lawn mower to do the 1/4 acre block or larger, painting was the last thing on the mind. Even the thought of cleaning the brushes in turps & the like didn't quite seem like a joyous chore either.

Interestingly even in the 60's homes were not kept that much better on the outside either.  I marvelled as I worked through suburbs on steam locomotives, & saw the extent of homes that were let go & quite run down that sat along the railway lines.  The industrial fallout in many places, such as the Illawarra, Newcastle areas, along with Lithgow, Bathurst & many others was also intermingled with the smoke from steam locomotives in the depots, along with the burning of coke, coal & wood in home fires during the winter, affected everything around them.

Heading west from Northmead at night on photo journeys, & coming down into Lithgow valley, at night you could smell Lithgow 20 odd minutes before you saw it, coming in via Victoria pass was no better, during daylight though you could see in the distance the pall of pollution at the same time as you smelt it. I think pristine homes were a last thought owing to how quick the fallout brought all the hard work back to all but nothing, in a short period of time.

In some ways, I am trying to reflect that era in my modelling, well its a good excuse for poor handiwork in scratch & kit building & something I am going to stick to.  To capture this sort of image, we are fortunate for some very good books out there that show much of that bygone era, these as well as travel experiences do much to rekindle those memories that I have from those years ago.

The photo showing the cab of 5917 in the about me on the home page, shows me hanging out the cab of the engine along with the Enfield Driver WK Smith leaving Enfield depot to work 675 north ex Enfield, this was the last working of a 59cl on a revenue goods train all the way from Enfield to BMD, the date is in 1972 & is recorded in a NSWRTM magazine with the listings of the last steam workings on the Short North.

The job was a call out, as the rostered fireman had gone sick, well I know the reason for it, as I also remember the trip as a hole.  I was to subsequently work on 5917 again in 1980 from Unanderra to Moss Vale & return on a Legacy train, this time as the driver, likewise some years later on the same engine again returning from Cooma from Bredbo to Michelago.  Times of memory rekindling to sit in the fireman's or even the drivers seat after many years away from them.

Some 5 eventful trips to China between 2001 & 2012 to see steams last great stand, also rekindled those memories.  Those memories were very easily rekindled by the aura that came from Steam, the various smells long gone, did not change. What the smell & atmosphere was in NSW back in 1972 at Enfield, & later in those other working times, was exactly the same thousands of Kilometres away on the lines across China, while the engines looked different as did the crews, that was all the difference really was.

Over Easter 2014 my wife Julie & I travelled down to Canberra, where we had a day at the War memorial, what a change since my last visit back when a teenager, & waiting on the Vietnam marble lottery to fall, when it happened I was left on the railways rather than the potential to SE Asia & the tropical resorts over there.

On the Saturday night we went to the photo shoot with both 3016 & 6029 in steam, where we also met up with Towelly, & another friend from up this way, & a very enjoyable evening was had. What made the night was after asking the museum about prospects for some sound recordings, & gaining approval for them on arrival I was pointed towards a person who was "driver in charge" of 6029. On meeting up with him an instant recognition took place & knowing him as an ex Engineman from Broadmeadow, he also recognised me & some time was spent in recounting names & experiences on the ground, then an invitation back in the cab.

The invitation was accepted with the warning, come & look at the luxury that its fitted out with.  Climbing up & into the cab, those smells & atmosphere was once again high in the nostrils & all other senses that could take it in.  Luxury 21st century 60cl style was found in the arm rests & seats, gone was the 1/2 inch thickness of padding over timber of horse hair seats & backrests, thin arm rests, rather both seats & arm rests were full of thick firm foam, as well as the back rests, which in many ways compared well with some of the better seats in diesels, certainly no other steam locomotive in regular service had anything like these.

I was then sat in the fireman's seat & told to put a fire on. Suddenly I was taken back to 1972 & looked at the gauges, & valves, after a short look over, I reached up to the main steam valve up on the boiler back head & was opened, then the stocker motor control valve above the 5 knobs that controlled the steam jests to the spreader plate was opened. The noise of the stocker along with the jets raised to a high pitch, the noise of which was quite incredible, even after such a long break, it soon felt just part of the normal operation in the cab.  I was then told that I had passed what apparently was a test of my memories.  Shortly after the safety valve lifted at 200Psi, & some stuck fingers in their ears & head down to try & shut the noise out.

The only thing that was missing to add to those noises was the sound of the exhaust at heavy load with the cab vibrating in movement, the injector full on & stocker going fast to deliver coal into the firebox.  I did not miss that one bit, nor the heat that was generated in the cab in summer, or steam leaks that prevented any sight of the driver with windows closed in the winter.

Ahead was the ultra shine of the brand new gloss black paint, later to be covered with fine ash when the fire was knocked down, one trip was all it took for such an engine to lose its gloss & just become a dirty beast, one of many.

Some photo's of the night. 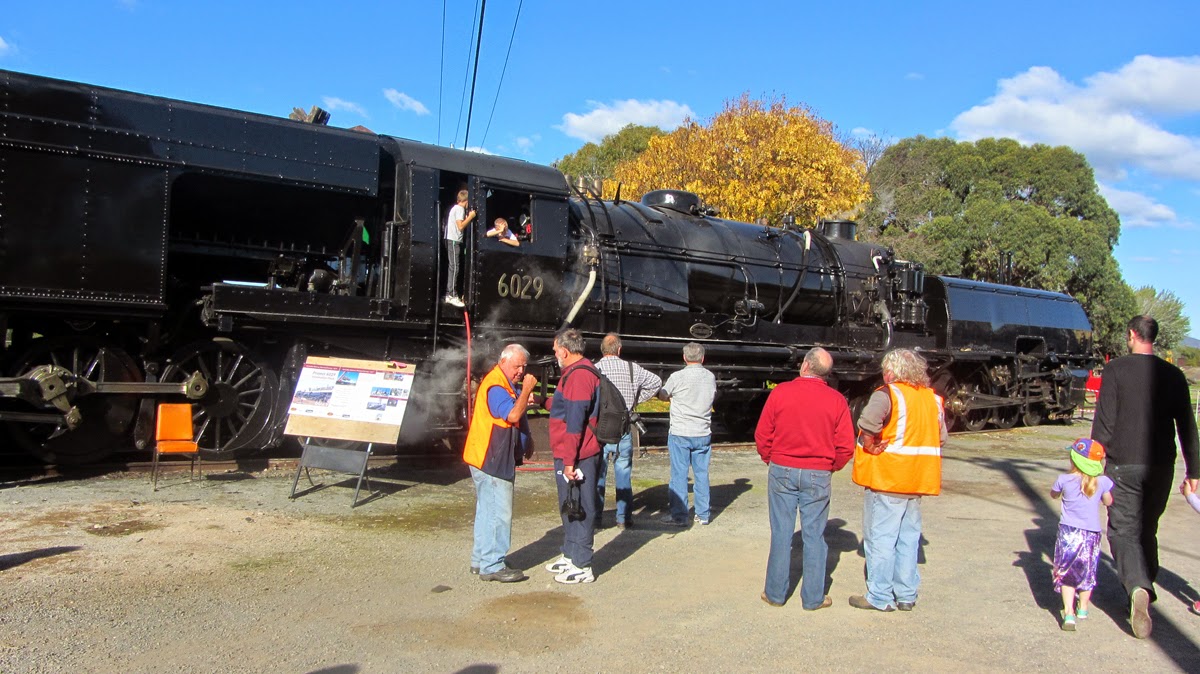 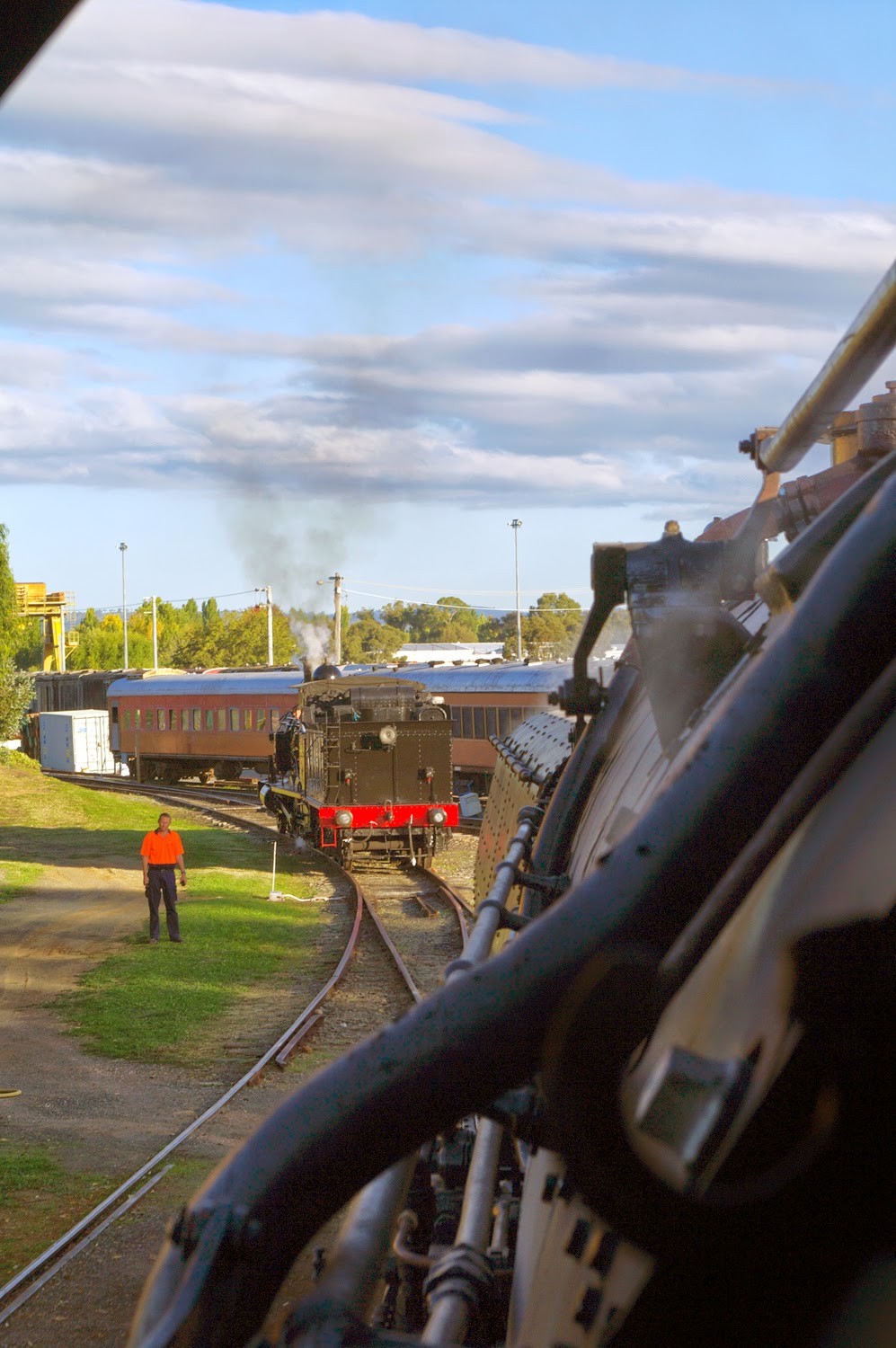 From the drivers seat
﻿ 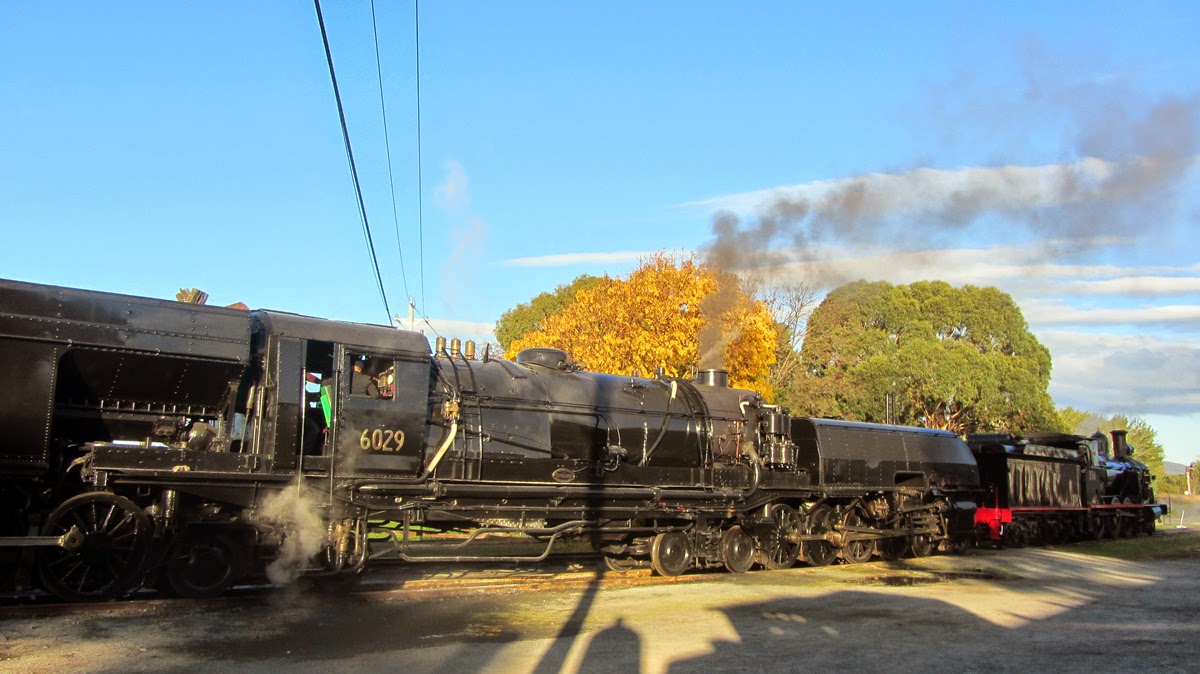 in position for the shoot 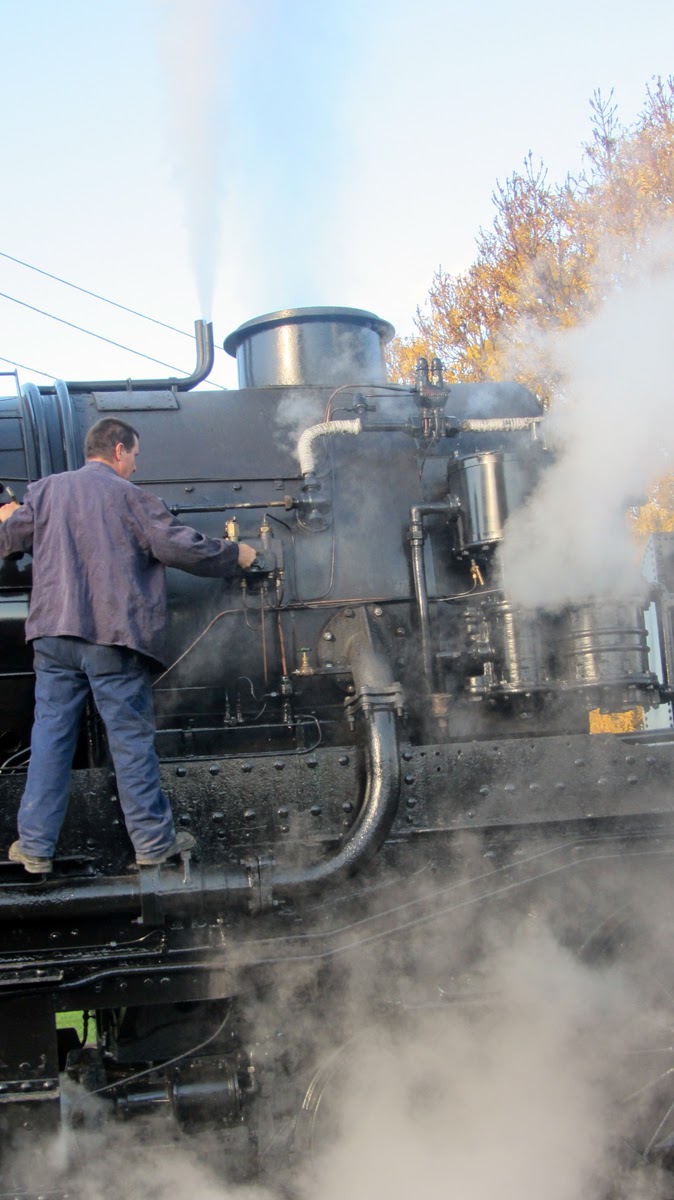 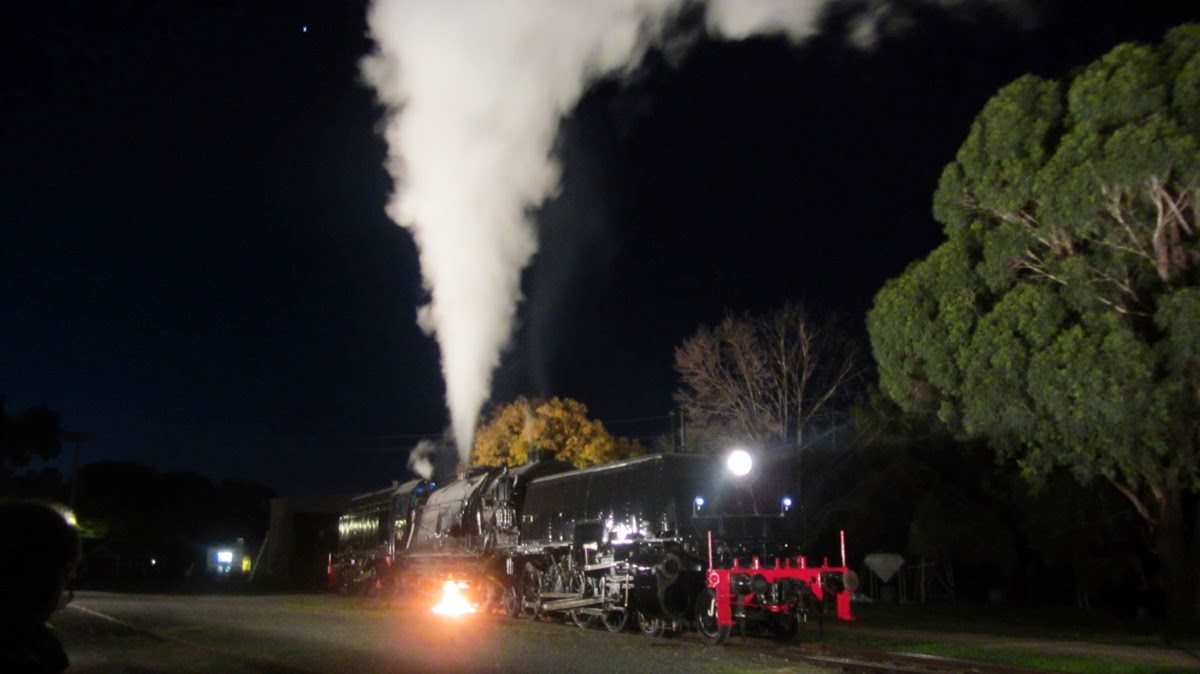 De-ash, the first signs of boiler weathering
Posted by Colin Hussey at 22:52