A mammoth task, the 2 forward 3 back shoe shuffle.

The past month or so has certainly been exactly like the heading depicts.
Slowly improving following the surgery but confined to use a back brace until at least next March it means a lot of restrictions on movement & quite frustrating, but now having nothing besides a metal cage & 2 screws to hold my vertebrae in place, in order to allow the back to fuse itself I have a real desire to take time.

Thus the layout progresses at a slower rate than I would have liked, I am waiting on a friend to fix a TT for me, that will go in to Akuna for the day pick up/school train, he actually fixed my Antons 125 foot TT that I only supplied to him so he could use it for parts, but he found getting that fixed helped him with the small one. Now I have a TT I do not want, nor need, so maybe fleabay will get a listing for it.

Waiting for the TT to be fixed, provided me with the need to get stuck into the area cleared up for the main Loco depot at Moblayne, the first part was to get the backdrops in place & then to try & fix the areas slightly damaged during the hanging as well as the split from the long dry caused by our home being set on high active soil. With that fixed, well good enough for me, I set about doing the corner area behind the depot, with scenery, & connecting the painted backdrop to the photographic one. 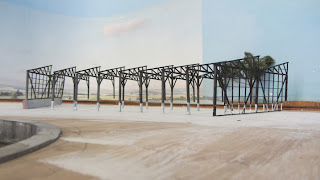 Trusses as originally built & situated in place using blue tac. Nothing done on the backdrop & scenery.

The area was then finished with low lying scenery & some trees. Then the Roundhouse was taken up with some gusto. But with that start it soon became very much part of realising the task ahead, as well as what seemed to be the forward steps being out distanced by the backward ones. As the project proceeded, it was obvious that I had done things wrong in the first place, simply by putting the TT in place & thinking a simple task to build all other depot needs around it.

The theory, as well as practice would have worked had I had some more space than I have for the depot. At this point, I searched for Round House plans, & thanks to Ray Pilgrim for those he provided links to, also Ian Phemister for help, & Ray Love helped out with some drawings of his.

Early on I had built all the main trusses, & planned to have them set in place in the early stages, but it was apparent that a lot more planning & rearrangements were going to be needed.  The round angles had to be readjusted in order to ensure the track leads off the TT would be sufficiently apart for smooth & trouble free operation, The cutting of the pits, along with setting the angles, & back brick wall, was a large project of trial & error. 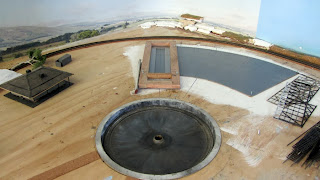 Ready for cutting the pits & foam cuttings for background scenery.


The pits were cut using a Trimming router, lent to me with a jig for the pits. As I am using Peco pits, with some modifications to build up the pit to be closer to the NSW pits, I had to adjust the widths using a single bit to cut them in place, what a messy & noisy job.  This work on cutting in the pits was done prior to the scenery being in place. 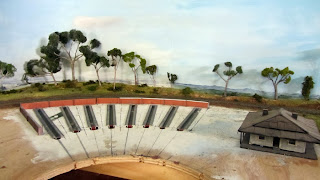 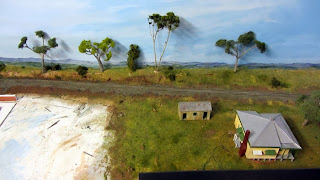 I had thought of different methods to secure the pits in place, ( I chose old faithful, clear Parfix roof & gutter sealant, holds everything in place firmly but allows for lifting if needed.)  & how to raise the Round house floor to the rail level. Initially I had looked at using some 3mm ply & build the whole RH & floor area separately & then move to the location, this was going ok until the ply decided it would fall off the layout top & break up into around 5 pieces.  I dismissed the idea of plastering the floor, & with more rulers & measuring I decided on cutting individual sections of 2mm Styrene to lock in around the pits.

The problem with this was that I had to do them in individual sections, a bit of a bummer at first but realised that the pit frame also raised the floor up by over near 4mm, & it left the styrene between the pits suspended, I used the cut out pieces from the sections where the pits were to show through to slide under the styrene, & that provided a firm & solid foundation.

This also led me to find the solution on fixing the truss support posts in position. 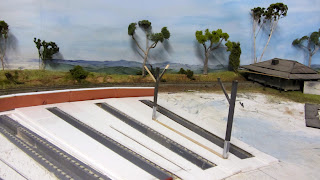 As prior to this my ideas that had seen me completely build all the trusses as well as glue to the main support posts, was seen as a bit of a folly, so another 3 steps back saw me remove the posts, but glue a length of 12x8 stripwood to the base of the posts at the correct distances for the two of them.  I glued the base to the pit cut out strips using Gel grip, cut outs in the styrene allowed the wooden sections to become secure, the styrene sat on top of the pit frames, & at the same level as the top of the 12x8, so a smooth floor was attained. 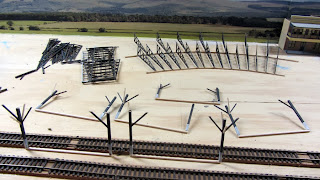 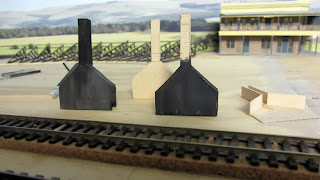 The fidly bits, smoke schutes in various stages of completions, 3 1/2 down, 4 1/2 to go. The worst part in building in wood is with this thin basewood sheets, they tend to curl when applying the PVA glue.

While I have pretty well enjoyed this project, being the largest & most complicated model I have ever scratch built, I will be glad when its finally finished.  The old building with the verandah around it is based on the old Chargemans office at Werris Creek, which I built from memory around 10 years ago, my first attempt at scratch building & working in wood.  Not too sure how far I have progressed, especially when looking at the RH & parts close, but I am pretty happy with it so far. The old office has a few bits fallen off, & some not far off.
Posted by Colin Hussey at 23:34