The roundhouse has been an almost constant stream of shoe shuffles some forward moves with a fair few back ones, thankfully though I think I have now reached the point where its more forward, less back but hopefully only forward movements from here.

Each phase of the construction has its moments, especially when one has never done a project as big as this before, so many new areas to learn, but I think the experience has overall been enjoyable.  The primary part of the roof along with all main trusses, & the inner or turntable end are now complete, awaiting the outer trusses with smoke schutes to be built & then attached.

The smoke schutes have been a challenge especially with getting the two trusses set together & supporting the schutes. Careful study of drawings & photo's gave me the positioning & basic measurements, along with how they were attached in the roundhouses.

With the schutes finished & trusses ready, the assembly became trial & error, especially trying to get the schute, supports in place & to hold together, in this area I could find no definitive drawing to give precise measurements & timber sizes, which meant a fair bit of licencing was needed. The first one took me a full day to get together without the edge box type frame.

The above photo shows the truss with scale 6"x6" cross bars glued in place to keep a constant spacing.  I could find no detail or measurements as to the spacings along the back wall for the two trusses, the space measurements were there for the inside or middle parallel supports so for simplicity I decided on the same spacing along the whole of the truss.  . 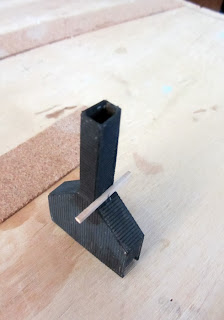 The middle 6x6 is to attach the chimney part of the schute, one side glued to truss, the other to the chimney.

The next step was to glue the schute assembly to the truss.

Having tried to do this without the 3 extra spacings was a real nightmare, this time & using this process I was able to assemble all remaining 7 trusses together in an afternoon, while finishing off the original assembly ready for painting.

A finished assembly awaiting painting & then attaching to the main roof, I realised that the timber sizes were a bit large, so I set about cutting all the remaining 7 cage assemblies with finer timber, only the 4 vertical sections will remain as 6"x3" with the remainder being 4x3 inch.

While I have been as careful as possible with the PVA there is still some areas where the acrylic tube paints have not taken as well as I hoped.  So after one test of a finished truss I decided to try another paint tool I use occasionally & that is blackboard paint. This proved to be better than the tubes, as it went over any area of the waxy PVA paint & covered it without issue.

What I like about the acrylics & blackboard paint is their total flat matte appearance, no sign of a sheen even of the smallest amount. To me the two mediums along with the chalk pastels provide the dusty look that is more realistic than is able to be achieved with ordinary paints including model paints,