As a follow up to the header photo, I am including a few shots that focus on the amount of coal in tenders of steam loco's. 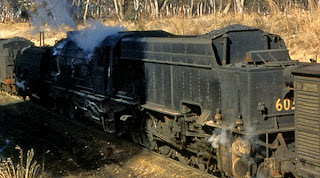 An example of how the coal got down in the tender of a garratt after coming from Dubbo with the high load.  6038 is assisted by 5364 near Borenore on 238 goods, it will barely make Orange with the remaining coal in the tender. 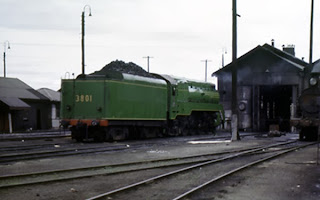 On the same weekend that the photo of 6014 leaving Dubbo, sitting in the depot is 3801 waiting to haul a Victorian Enthusiasts special that night, it is without doubt the highest load of coal I have ever seen in a 38cl tender. 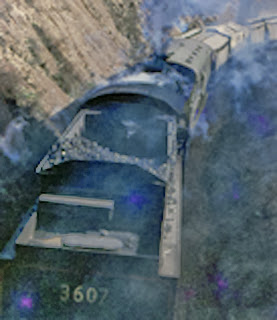 An old & age affected photo of 3607 pushing up a block wheat train at Tumula, in 1964. Just out of the loop this is the last banking job before returning LE to Bathurst before its next turn of duty. 3607 came out as an assisting engine on 45 Coonamble mail  & remained at Tumulla for more than 12 hours, having had 2 sets of men over the time. 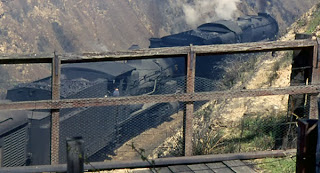 3815 leads 5450 at the same location as 3607 on an Oge bound train. As both engines had auto's on the tender, the 38cl with the larger air pump was to lead, also passenger engines were to lead goods engines based on the auto to auto arrangement & air pump capacity. The freighter came fresh from Bathurst & coaled there, whereas the 38 would have come either from Dubbo or OGE in its previous up train, would have worked from Lithgow to Bathurst on another train & then on with this one. Bathurst could not turn 38cl owing to a 60ft TT. As Dubbo & Orange were the only depots to have Northern coal, & 38cl had to have Northern coal, they were set on a roster of Lithgow - Dubbo - Lithgow - Orange - Lithgow - Dubbo. They were completely shovelled forward at Bathurst, & Oge when working through as well as at Lithgow on the turn round. When spare they could work goods to Orange & get coaled there.  In this photo it can be seen how the coal has been shovel forward to the front of the tender with none basically left toward the rear & at the tender backhead would have been clear. 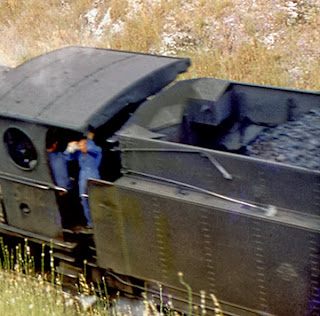 Finally 5412, is about to enter Carcoar Tunnel after working from Bathurst. The coal remaining in the tender is not too bad considering the distance from Bathurst & having steamed most of the way. The coal would have been sitting just at the edge of the sloped rear, & the doors to the coal area have been closed as a means to help keep the smoke out of the cab in the tunnel. When working through any tunnel, when the doors had been opened, the smoke would roll back into the cab, shutting the doors kept some of that smoke out.  Some enginemen were show off's & in this case the fireman is acting out the combing of his hair to look pretty for the camera.
From a personal perspective, I like to have my loco's with varying amounts of coal showing in the tender rather than having them full or the terrible looking plastic plugs that sit in tenders.
Excuse the quality of the photo's even had they been full size, they would not have been any better, in fact they would have been worse.  I have a huge job to rescan all my slides, & doing them in high resolution before they are totally wrecked. Many of the slides that are from the early days, were terrible for colour & on non sunny days they showed no sky colour at all. The photo of 3801 is an example of Ilford film on an overcast day, I tried Agfa at the time & it was as bad if not worse.
Posted by Colin Hussey at 19:09