Recently I had a bad experience which is not uncommon with Ebay, I had been looking at getting a cheapish Lazy Suzan for a paint platform & also to use for Locomotives on a bit of track on rollers to help with the painting of the wheels at slow speed, also with some programing.  An add there for 2 x30cm types including shipping for $17.50 was too good to miss, until they arrived & the best one could say was Cheap, Nasty & certainly not Lazy Suzan's as we know them, they were advertised that way with "turntable" in the title as well. A turntable yes, but that's all one can say. I sent them back, & the return shipping was near as much as I paid, I ended up with a refund but out of pocket.

That same week after the return Aldi had 45cm tempered glass proper Lazy Suzans for $8.00 each, so one for home use & one for the layout. Too good really to get it mushed up with paint, so I cut some white coated 3mm Masonite off cut to the size of the LS, & glued some sticky mat to the underside, that now sits on top of the LS & can be used for house & hobby.

Some time ago, the sticky mat items were promoted by someone in an AMRM edition,
& there were some warnings on the use of them, following it.  Last year I was at the #7 district conference here on the Central Coast, & a fellow who had a clinic stand on using styrene had a stainless steel rule, with one side of it covered with glued on Sticky mat, he swore by it as it almost totally prevented the rule from slipping on styrene when cutting it, subsequently I obtained an 18" SS rule from China for $5.00 & I have to say it works a treat. 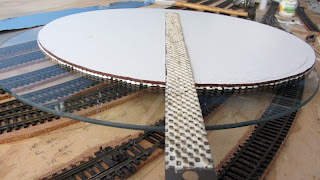 The past few months have not been the greatest as far as layout progress is concerned owing to not being able to get around very well, so the time has been spent working on long started kits, & scratch buildings.  These early attempts were not that great but with some patience I have brought them up to an acceptable standard, at least for me.

Job 1:  I had an old Structure Rama country shop kit, that I had removed a wall from & decided to build on a residence to the side, which has all but been finished with just a single window to be obtained, & finish off a couple of areas on it. 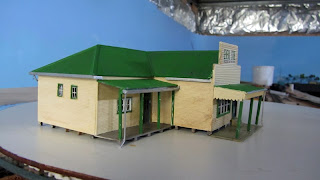 Job 2: Provided a bit of a major challenge.  This was to use the removed wall from the above kit & use it to form the outside wall of another store, that was to sit at an angle along a wall.  The idea was to have a full width at the front, but at the rear to only have half the width to enable the roof line to be at the full height. I would have preferred to have had the building much narrower but I could not work out how to have the roof line at the correct height as well as having the appropriate pitch of the roof. But, as I  wanted the buildings to be fully enclosed as I had fitted 3.5mm warm LEDs into it &
did not want any light bleeding.

Finishing the walls & main viewing side roof was no problem but getting the rear roof line in position, without simply gluing the building to the backdrop wall meant some work in cutting & working angles, thankfully the end results are not too bad, & the wall side having the roof made in 2 sections, & the rear section being fitted to the inside of the other roof made for an acceptable compromise. 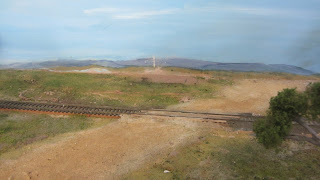 The stores location that required removal & redoing the scenery at the spot for the building as well as redo the backdrop painting. 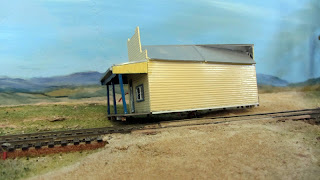 Building showing the backdrop wall side, & the way I had to fit the rear roof under the front side, with new low backdrop painting. 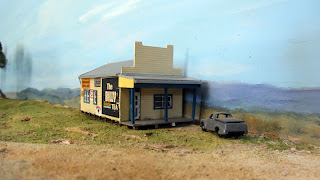 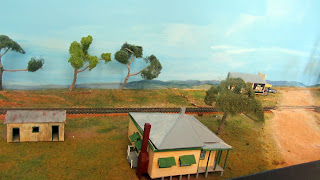 The buildings at the front are around﻿ 90% complete, to finish the scene will require fences, a street light as well as railway crossing stop signs. 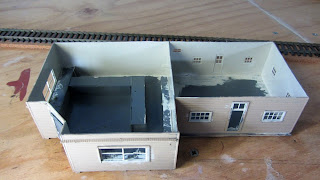 Lastly, the above building started off as being a small corner store,﻿ the idea came from seeing similar buildings along the roads in rural NSW, initially it was to be just a store, but like the other one, I realised that they too had small residences built into them, thus the room on the side is an after thought add one.  Prior to finishing it, I did mark out rooms for it.
﻿ 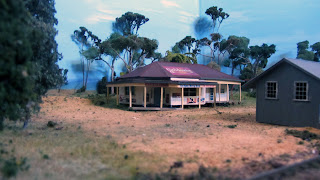 The corner store all but complete sits in Coxes crossing, all but finished with just some minor work to be done around the footpath area.﻿
Posted by Colin Hussey at 23:01