A  bit of a longish post as it covers some work that has been carried out on Essence in the past couple of months, mostly its been sit down jobs owing to the health issues, hopefully that is now about to come to a conclusion with surgery planned for the 10th, which will take me out for some time.

Rolling stock addition. The IDR Elephant CW, a combo part kit & RTR Austrains 4 wheel underframe, I was looking forward to getting the model up & running as it provides a single model od a unigue somewhat different stock wagon & I think adds some interest to a 50’s type train,

The primary IDR parts include what appears to an already assembled 4 sided Urethane type body with a couple of brass wire, 4 well crafted brass buffers & a small decal sheet. Once finished even to just the undercoat point the model looks great & is free rolling, & a worthwhile addition to the layout.

The kit I received at first glance showed how far the detail of Urethane type models have come over the years & is an absolute credit to those responsible for its creation, & putting the sides togethe making for ease of assembly. On my model there was a pink blemish/spot on a door that was no real problem seen on both outside & inside of one side but, hardly noticeable with the undercoat.

Like all kits made from this product there is a reasonable amount of flashing to clean out & tidy up, initially I found that easy as one side & one end had very thin flashing that filed several of the gaps in the timber frame, but other side & end of was totally different with the flashing being much thicker & harder to remove. Not a big issue on the side but on the end it was harder owing to the smaller space to work in, & having end braces from roof to floor, I ended up breaking one off totally, replacing it with a small piece of 20x20 styrene, & cutting it down slightly.
To fit the RTR underframe is a venture of time & patience, with the removal of the metal weight & slowly filing away sides & ends to fit inside the body, both sides of the weight has a lip which has to be totally removed to allow the sideways fit & some steady work on the ends.

Once the weight is reduced I found some issues with fitting the two parts together, & takes some adjustments with the filing of the sides. The problem showed up that the body was not completely square, & on one end slightly bowed inwards, however with patience all went together ok.

The key to getting the assembly together is to line up the holes in the RTR underframe with the corresponding holes on the body to take the buffers, as they have long ends that are required to fit through & hold all together.

In this area I had some trouble getting the holes lined up, also the soft brass pin broke off on one of the buffers. Some trial & error again got the pins to the correct length & then made sure the wagon sat at the right height & final assembly & gluing & a very nice model is in place.

While simple in principle & a worthy addition, I think the model is let down slightly by the bit of trouble with the base fitting & heavy flashing on half the model.

For me the worst part however, & this is not the fault or blame of IDR, but that of the RTR part, & that being the terrible oversized Chinese rubbish couplers that are supplied with the model. As IDR purchase this from Austrains (so I understand), the concept is good, however, these couplers on other Austrains 4 wheelers are by far the worst I have ever experienced & have had many failures, even some models not having head springs, & some lying loose in the box being too short for the head. I now replace all the couplers on these models, which I think is an added & unnecessary expense of both money & time.

The replacement is not all that easy either especially on the hand brake end with the need to carefully move the cross wires out of the way to remove the couple box lid screw, to replace the coupler. To help in this process & simplify it, with the weight removed, I set the end on some blue tack, with the new coupler in the pocket I press the head down into the blue tack as it holds the frame & coupler firm in order to then work to replace the cover & screw whilst getting the brake wires back in place.

I would certainly recommend the model to others if they have need, also I look forward to other releases from IDR in the future. Despite some small things I am more than happy with the so far end results. 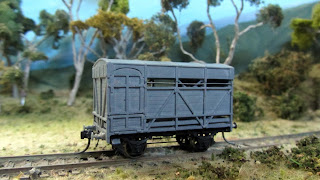 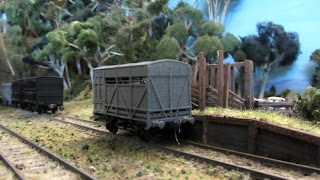 A slowish project & one that needs a bit of finishing off is an A4 station built from scratch along with the separate signal box, & an Ian Lyndsay oil store room combined men's toilet for Akuna.  Lights are fitted in the form of a 3mm warm white for the station & a 3mm yellow for the signal box. I need to fit another resistor to the station to tone down the light, also to further paint under the roof as the glow is showing through the paint.

The station itself is made from ordinary 38x19 pine cut to length with scale timbers glued to the sides, with black painted glass paper for the tarred station area & yellow Sydney brickies sand for the remainder of the platform.  Some fences are needed to put some finishing touches to it eventually. 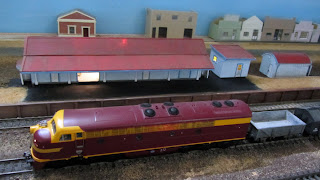 Moblayne is the main depot area of Essence, it should have been where I started first, the reason not to was owing to my thoughts on what to do for the backdrop. While reasonably happy with the low level painted aspects of the remainder of the layout, I was not prepared to go down that path for this are owing to it being more open & harder to mask with trees & other scenery.

Over the years I had always liked Ray Pilgrims attempts at photographic backgrounds, likewise several other layouts that have also gone that way. I believe that good edited photo's add to the look & feel of a layout whereas I have seen many great layouts that have added large painted backgrounds to the layouts have tended to take away from the layout & spoil it.

I know of many who believe differently & I think the problem may well be getting the backdrops at sensible prices, certainly photographic ones are not cheap either.  I have liked the Haskel series on Australian scenes but they had been off the market for some time, & with my health getting worse I saw the need to make a decision on what to do, in order to get Moblayne started, & finish off the rear of the tracked areas, as it required working over the track or getting up on the base itself.

A few months back I discovered some back scenes from an English shop & going through them I found a couple that could fit in with the slopes area of mid NSW, while not totally correct, they were available & the price for 2 packs each of 10feet, & of the same scene but mirror reversed was just right for the scene behind Moblayne.

When they arrived I was quite happy & with the cost at $50.00 for the 2 including shipping much cheaper than the Haskell product, which have since been back on the shelfs through various hobby shops,

Having wallpapered before, these were still a challenge & while up, the finished job is not great but, with some careful brushwork in a couple of months when I am improved the bits of problematic areas will be largely irradicated, Moblayne cleared & ready for the backgrounds to go in. The following 3 are the next days view prior to any work being undertaken. 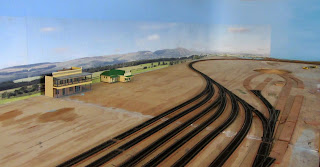 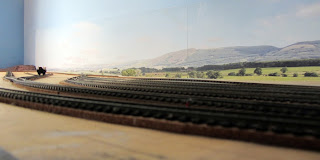