The heading says it all as little has really happened on the layout now for some time at least in the moving forward way.

Since the last post back in September last year I have tried 4 times to finish this post following the last one and when I hosted our local groups weekly meeting so this is a bit of reflection over those times but also, to events since and for the future.   On meeting nights I spend the days leading up to it preparing the layout to ensure or at least trying to ensure that Murphy does not show his ugly presence, this day was pretty much the same, first off, a check of all points to make sure all blades throw properly also a good vacuum over all track to ensure any rubbish is cleaned out, then a clean of the rails.

Once that is completed  I run a test train to ensure all runs well, usually the test train will have an S truck behind the engine with one of the little Noch clip on track cleaning pad on the leading axle to wipe up any residue from the Fleischman track cleaning pad. Next is to test each train that is to be run on the night. and following another two around after the cleaner and each showed no problems, so I was pretty happy with that and looking good for the night. Next was a short "holiday special" with a TOR 32cl and two dog boxes from Austrains, and a TOR PHG. The train started off well and then stopped and became jerky, stop -  started, checking nothing wrong with the track and all another attempt to run it had the same problems this time I noticed some sparking under the boiler, so it went out of the roster. All other loco's doing the round ran well so onto the night and why the sparks.

A sort of concern was the old reports that said the 32cl was a potential disaster, but that night I gave the 32 to Gerry Hopkins to check it out, and the following week he came back saying the 32cl has very strong magnet in the motor, he believed the strongest he knows of, resulting in the model being very prone to picking up dirt, and especially any loose static grass near the track, and my model had a lot of it, which was the problem as the static grass sparked with electrical contact.  This meant I had to redo my cleaning roster in a big way, the model actually performed brilliantly after getting it back but is now off the layout as is a lot of other items as well.

Since that meeting, I did a lot of thinking, especially with the amount of dust and loose scenery bits that caused the problem. With a look around the train shed the decision was made to do complete layout cleanup,  it also made me realise how inadequate the room really was. Simply its a standard 6x6metre garage, with one opening door, the walls and ceiling have been insulated along with a wind heat extractor in the middle of the roof. Overall for a garage I have tried to make it as dust proof as possible and I thought I had done a fair job really.

A look however at a couple of carriages with black roofs that had sat in a siding for some months now without moving, gave me a real reality check, rather than being low shine black the roofs were actually now a very flat grey look, a touch of them revealed a neat layer of fine dust, something that all the models had over them.  These aspects made me really look hard at things and that was not confined to just the layout either.

Dust I can only think is an incurable item in a neat home, let alone a converted garage, at least in the home dust is manageable with vacuum cleaners, brushes and the like. How then on a layout that has such a large flat area, where dust can settle and in many spots that are not able to take vacuum cleaning to the same degree as the house. I know of one modeller whose layout is part of the main house, but he has large covers that go over the layout when not in use, a great idea, but as he has more of a layout that is not rural based as many others, its not that hard to set the covers in place.

None of that helps solve the problem, so the alternative was to do some work on it. The work ended being more than som, rather an all but complete removal of everything not glued or wired down  then using a stiff hand brush, with a funny brand stamped in handle NSWTD, (looked similar to those used on the footplate) the stiff bristles were easy to sweep all up loose items but soft enough to not damage anything gone over.  As I worked, I brushed the whole areas of the layout, especially the track and all the grassed areas, hills and the like, progress wrought in many piles of loose static grass, flock, even ballast in some areas where the glue had given way. 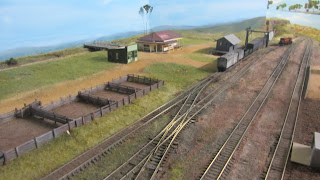 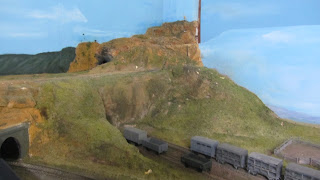 As the work continued I tried to keep the dirt like items separate from the flock and grasses then getting it into different containers in case it can be used again.  I now stare at basically a barren landscape that is devoid of trees, and looking somewhat sad really, the removed trees were checked with many of them consigned to the waste bin, with those that looked ok consigned to a different bin for reworking at some point of time in the future.


Prior to all this and before the meeting, I had been working on trying to build an Abatoirs, I could remember many times driving past the old Tancreds structure and sidings at Tenterfield, and it was different to most others, but there is nothing left of it these days, likewise, despite much searching I could not get any details or photo's of the works, until an ex driver from WCK was able to come up with a part photo, with that in hand, I set about a scratch built modellers licence version of Tenterfield abatoirs. 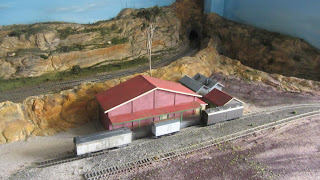 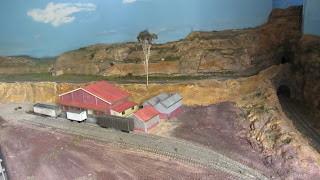 The above photos shows what was achieved prior to the last meeting for the meatworks. with the backdrop of Nullo Mountain with a solitary Sedum to add a bit of greenery.

With all this happening, I have also been hit with further issues regarding health, along with new scans have revealed a lot of degeneration along my back but also neck and shoulders so the future means I have a lot of adjustments to make to my lifestyle. With all of this and following on from the clean up and clearing off of the layout, I had to along with talking to my wife Julie who is also having some health issues we have decided that we really needed to consider the dreaded downsize options.

Both of us have similar interests outside our hobbies, and neither like the cramped lifestyle with mini blocks of land and what I see are all but ghetto style clusters of homes with little or no space on the block. something we have enjoyed in all of our married life and mostly where we lived has spoilt us in that regard, but approaching 70 reality hits.

As much had already been packed away off the layout,  Essence is being reduced and the shed is now looking like a bomb has hit it.  Three train consists sit on the layout, ready for another meeting to be held on the 8th of March, which will be Essences swansong. At least with all the work thathas been done it really only final clearing off and packing of the what's left and then the layout to be dismembered, and to that score the way the layout was built it was always going to be a job made a bit easier with the layout in sections, and able to be stored flat.

Essence began as a dream, I guess something that probably had its embryonic beginnings in the 50's when I was given a Triang train set that was a largish oval and provided interest and our pet budgie at the time that was not constrained in a cage used to fly down and sit on the top of a carriage for the whole time it ran, but make a loud noise in protest when stopped. I could nightly hear the trains that ran on the Western line between Westmead and Wentworthville, the sounds that came across were not understood by me at the time but the late night sounds of steam and momentum speed and exhausts as they went down the dip and slugged away up the grade to Pendle Hill were wonderful in memories.

Then was my working career on the railways but modelling always sat there and some items collected over the years and some of those now part of some council tip while others have been worked on and will form part of any future layout.  Is Essence dead?  A question that I ask muchly of myself, but the answer is hopefully one that will be positive and that will very much depend on what we do over the course of this year and what sort of home and layout room becomes available.