I have just received my Auscision 43cl, the first item other than the goods shed that I have purchased from Auscision.  First impressions are quite good & am pleased to have added it to the fleet of loco's I have. I admit to it not having been on my list of loco's for Essence in the early days as I was after an all steam fleet, but on one of those early reflections I realised the need for some early diesels to represent the period I am modelling. I now have the 40cl from Eureka as the sole outstanding diesel to come, & I have to admit to being rather pessimistic on that front, which means just the TOR 42 & modified 44cl with the 43 as being on the roster.

Opening the package was a nice surprise when compared to models from competitors was the printed items that came with the model, an exploded 2 sided sheet showing all the add on bits, & another sheet with general instructions on it.  Sadly these are something that has been neglected by other importers of late.

While not a great issue, I would like to get the in cab detail section out with the figures primarily to paint them in other than green, it wasn't until around 1975 that E/men were issued with clothing of the sea green variety from King Gee, prior to that overalls or old clothes no longer in the fashion section were worn.  Interestingly with that green clothing issue, a 3/4 length Navy Blue King Gee dust coat was issued, which many used to protect the clothes from the greasy/oily engine room of diesels like the 43cl, & other Alco types. 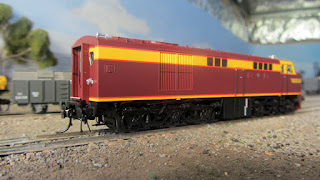 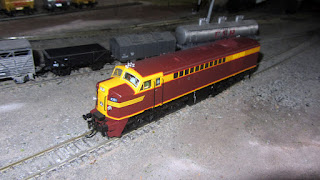 The above 4 photo's capture some of the very nice detail, especially the last one which highlights how well the bogies show up the air lines & difference to the Goodwins flat frames.

The challenge really is now to add sound, & to weather the model. How do you do justice to the model details when the realistic weathering appeared on these loco's almost from the very first start up after overhauls & the like.  Oil leaks running down the side from exhaust, as well as at the side shutters, & air filter intakes along the side.

Oil leaks as hinted at in the 2nd paragraph was very much what was synominous with these engines, strangely though the 40cl which was fitted with the same donk, did not show the same amount of leakage, at least visible to the ear anyway.

As a fireman at Enfield, it was not unusuals to be on these engines, & in 1971 after passing the drivers school & on 3 days ground tuition, at Delec along with 5 others & the loco Inspector, we were taken over every diesel that was in the paddock or in the case of the 40cl, one that had arrived for 180 day inspection, the following day, so was positioned at the Northern end of 4 road between Load Box & shed. At that time the 43cl had some modifications on them, mainly the hand rails to the nose, but the bottom rung on the rear ladder still sat at the same level as the short diaphragm meeting arobics to use it & get into the cab that end.

As I worked them more when at Werris Creek between Nov 69 & Jan 71 I came across them more than Delec/Enfield, but when doing the drivers instructions on them the 6 of us were split up for the engineroom tour, thankfully this 43 had been cleaned in the engine room so oil was not as evidant. The thing was & like the 42, 422cl the 43 was blocked off to walk from #1 end to #2 end via the engine room, it was only by going down the firemans side could you get there, & on the 43 you need something like a dust coat over your normal clothing to keep clean, as even on that side was a twist motion to get to or from 2 end.

The worst part of it was that it was not until late in their career that full length ladders were added to #2 end, going light engine especially to Cooks River, the fireman had to work the staff hut at Marrickvile loop, & if you had the old short ladder, the only way you get back up in that end was to use the auto coupler lift rod as a step, & then swing yourself up, most drivers however would help you up by pulling your right arm while you hung on to the left hand side of the rail.

#2 end or hostlers end as it was called, was only fitted with an independant or engine Brake valve, which was carried from the isolated Brake Valve from #1 end, For the driver a short cushion was provided by being glued to the top of the weight block on that side. The firemans seat was the toilet, or he usually stood up for the LE distance that  had to be run. Later vigilance controls was fitted next to the door for the fireman to operate, These hostlers ends on the 42 & 43 meant that enginemen had to sit in the engineroom with no noise barrier between the Prime mover & the so callled hostlers driving position.

No1 end cab, was a marvel, with entry doors all but opposite each other meaning a straight across walkway. Entry from standard shed platforms was direct, no step up or down into the cab, as it was the same level. For a first timer, once in the cab & looking at the seating position was a bit off putting, the floor was the same level all the way round to the nose door, there was a large step up, from the floor, than another step up towards the seats.

Standing on the floor it was not possible to see out the windscreens, the seat cushions were around shoulder height for me, original seats were good, but later replaced by kidney crushers. A cab heater of the blower type was originally fitted as was a water cooler, both later removed, the water cooler  owing to some dysfunctional enginemen using it to empty billies into, rather than out the window, the fan heaters were too hard for the fitters/electricians to keep going so standard (useless) non radiant bar heaters were fitted.

The seated position, was incredible, & one hoped these were not rough riding engines, of any type, as if you came off the seat, you would likely break your neck, they were that high. For the driver, the controls rudimentary by todays standards were all well in reach, old speedo's had no tapes in them so, a bit of speed overrun was found with them to enable momentum running of the train. The main throttle handle like the 40cl originally had ratchet opening, meaning you could only open the throttle one notch at a time, but when you advance the throttle you had to let go of it to release the ratchet then open again.

These were progressively removed, but at least one of the 40 & 43cl had them fitted well into the 70's.

As for operating them, I beleive along with the 40cl they were the best riding diesel from the 1st generation engines, they actually were way out in front in that regard, unlike the 44 which would swish & bounce in road holes, or the 42cl which would outdo the 44cl & I think a reason why the original seats had arm rests for you to hold on to over certain sections known for holes. The 43's breezed through them.  It was only when the 422cl & 47cl arrived that we had diesels that came close to old girls for ride qualities.

Having enjoyed the presence of the model on the layout it will now go back into the box until I work out which sound decoder to fit.
Posted by Colin Hussey at 11:39