Gnomes, those little unreal objects that stick up in gardens, love em or hate em, they seem to be found in many inespicable places, especially the unknown or unseen or ungnome types.  I started to think of those little items in the garden during the past 2 weeks of work on the layout in preparation for 2 open days during the NMRA conference at Ettalong.

The gnomes or should I say the known aspects of the layout as far as operating locomotives are concerned comprise of 1x32cl (TOR); 1x35cl (Austrains), 3x36cl Austrains, 1x59cl DJY, & 1x42cl (TOR).  Also in the fleet but not as yet run over the layout except for running tests include 1x57, & 58cl both DJH models. I would have liked to have had the big engines working but as they had derailed on some locations, I believed that it was a lot easier to get the 59cl working over the layout without problems first, and as its turned out a good option.

The week leading up to the first open day, on Friday 18th October, had all things working well, no hiccups, & even the 59 was running around without problems at least in the one direction I had tested it on, which was good enough for me, the day & the known gnome. On the Thursday evening I went to bed with a sense of relief & slept well.  Then Friday!

To the Train shed early to make sure all was ok, & as the first train for test was about to be run, a loud bang, & I looked over to discover the drop down bridge had come down by itself, or as it turns out by a very strong gust of wind, a check of the bridge & approaches found the track on the high side or the side that was not on the hinges, had broken away, & the alignment was shot.  With an hour to go before visitors I had to relay the approach track & realign the track, & bridge.  The first ungnome event for the weekend had poped up, but I managed to just get fixed before the first visitor.

With the Friday being a very windy day, the bridge was left down & lifted as required for entry & leaving, a good thought as that was its purpose.

Gnomes I understand have their primary origins in Ireland, & the wind/bridge episode was the precursor to several other incidents that are brought about by the unknown & unseen vistor, the ungnome commonly referred to as Murphy, these are the little things that can destroy a day or more & lead to much frustration, no sooner had I started running some trains for the visitors than some played up, thus the promises that seemed to have been provided on the pre visits were out the door as it were.

The upshot of this ended when a group turned up & were not worried about having anything run, & it was just an explaination of what I was trying to achieve & pointing out the various points of the layout, to me this brought out the thing I love about the hobby, sharing with strangers tips as well as remedies to many areas of modelling. On the Friday I had 14 visitors & only 5 on the Monday, it was a first for me in having an open day but one that was most enjoyable.

The issue it seems with the 59cl is common as one Taree club member who has assembled quite a few of these DJH kits told me that they commonly derailed if all the driving wheels had the wheel spacers put in place during construction, as it made them very rigid across the driving wheels, he said that on all his installs he only fits them to the main connection of the rods.

On the Saturday night of the Liverpool Exh weekend, two friends in Rod Young (Comtrain) & Roger Lloyd from Victoria had a night with us, the layout proved an interesting time, & I give thanks to Roger in that he watched the procession of derailments & suggested the set of points  was more likely the problem, & by doing some realignments could well resolve the problem with the 59. The thought did not worry me as I had decided to make all the points on the layout including here with slide switch operation rather than servo/singlet type operation, meaning a fair degree of work had already been done here. 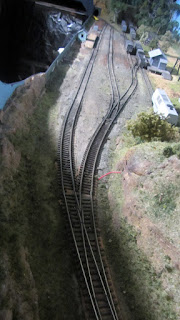 The 3 problem areas & points
Fast forward somewhat:-  Well after a week of some frustrations, which included not just the need to fix points & track in the yard/loop area but I had to do a complete lift of the track from Nullo Mt, down to Jacks Ck owing once again to the factor that I believe Murphy was in the cab & driving the 59cl as it dropped off the track in a couple of spots, something that had not occured previously. Coupled with the aspect that there was still a problem with the primary points from Main line to the loop & goods shed area, with the 59 still derailing.

What came out as a result was that the track had actually had a twist in it, along with the track not being set correctly at the Jacks Creek end with the radius being less than the 28" it had been set for. Running the aluminium alignment gauge down the length all the track was fine untill near the bottom. being reset to correct radius was surprising at how far out it was. Fixing that was time consuming with the track only getting pinned down, until the primary gnome was despatched.

Looking to Jacks Creek & my mind went to what Roger had previously said, so as the 59 was still giving problems, I removed the loop/goods shed points, reduced the distance between the main line points, & made a direct straight approach to the goods shed & run round road.  Dare I say Woo Hoo. 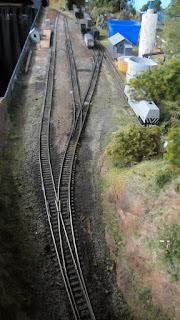 After.
The rearrangement made the whole area look much better, the loop is closer to the main line as it should be, although the curve out is intentional as a water column is to go in between the main line & loop, something that was not uncommon on NSW rails during steam days.

With all the trackwork being finished the next thing was to get the 59cl working. Taking the model back to the group member who had built it, he removed the wheel spacers from the  2nd & 3rd set of driving wheels, which has fixed the derailing problem, it runs without any problems into each of the 3 roads now.

The only problem if one can say it is that it needs to have a fair bit of running in, another feature of these kits is often the grinding like noise that comes from them until they get up a bit in speed, the running in will finally bring it line to be put to work, once it has done checks around the other points on the layout. The 57 & 58cl are also getting the spacers removed they too will be tested in the same way, so here's hoping.

So, where are the gnomes?  Well the alingnments of the points were the unkowns, owing to the problem being non existant for a large proportion of the locomotive fleet, yet at the same time they were also the visible ones that were causing grief.

Well, just as I was getting quite happy with the way things were going, the hidden gnomes showed up again, as Murphy had a field day, when after some running the 59cl died, no power no having run around the layout around 6 times without any real hitches, it simply stopped. No sign of shorts on the track, so back to running a 36cl & it ran without problem over the whole layout. Then to finish it all, the original Chinese coupler on the TOR 32 decided it too wanted to toss it in, with the jaw spring going missing, causing constant uncoupling, just as well I do not drink Irish Whiskey that would have brought in the Murphy family to the circus.

As per usual, when something happens with couplings especially the large & poor Chinese varities I replay them, so that was carried out using a Kadee Whisker coupler, with no room for a full Kadee box, along with the screw not being long enough to give a decent bite with the box in place anyway, I simply slotted the cover & coupler into the cutout, using some blue tack to hold the cover in place, also removing the rear wheel for ease of access. Screwed in place the whiskers fit neatly in the cutout & work a dream.

Hospital again on Friday for new knee, so the door gets pretty well locked at Essence.
Posted by Colin Hussey at 22:51