Some work at Coxes Crossing

Well the past few weeks aside from other things has shown a slight degree in work on the layout.  As previously mentioned the area known as Coxes Crossing had annoyed me for some time, so it has recieved the first stages of being updated a bit. 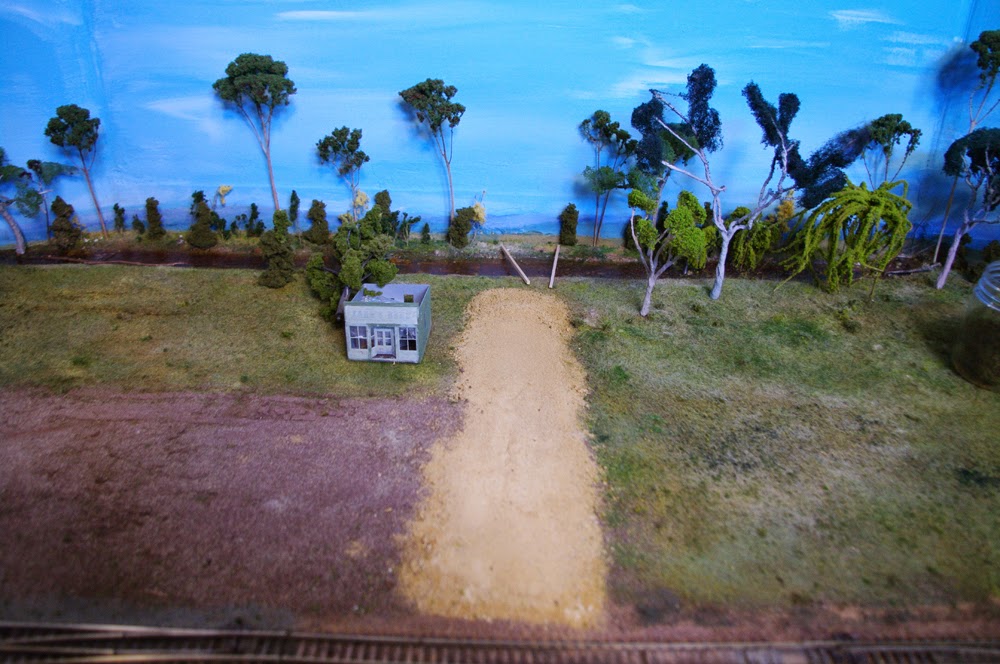 The above photo is a repeat of the photo previously shown & marks the main area to be worked on,  it shows the creek along the back that was what annoyed me the most. 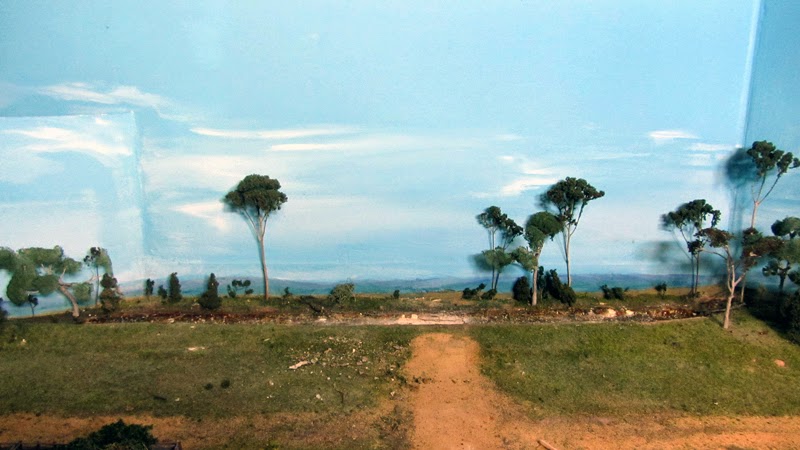 Removing all the trees & building in the foreground I then attacked the creek & had to cut & chisel the old enamel based clear coating I had used for the creek. It was supposed to be clear but turned into a very red/brown stagnant water look, as mentioned also on hot days it softened significantly with whole shed smelling of the enamel  fumes, quite unpleasant. 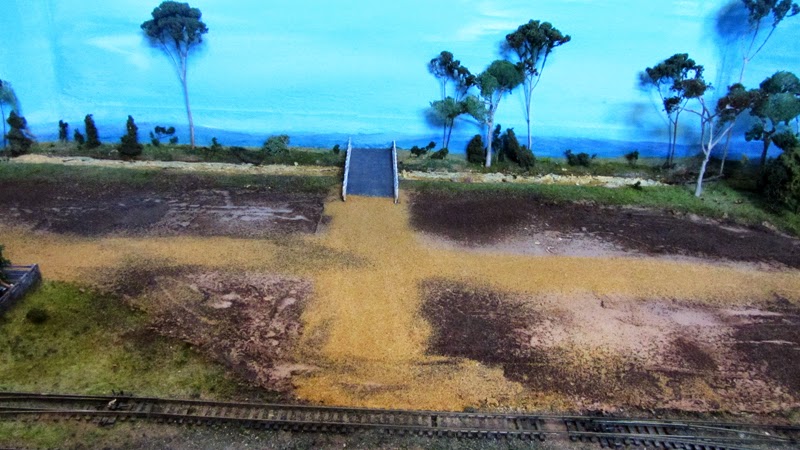 Taken basically from the same spot as the previous photo, the new cornice cement covering went straight over what was left of the old grassed area.  Prior to this work I used a sharp edged 75mm bakers dough cutter type spatula to scrap off as much of the old grass I could, amzing what I was able to retrieve, & much of it stuck together & has formed nice lots of clumps, which will be reused on this & other unfinished areas of the layout. 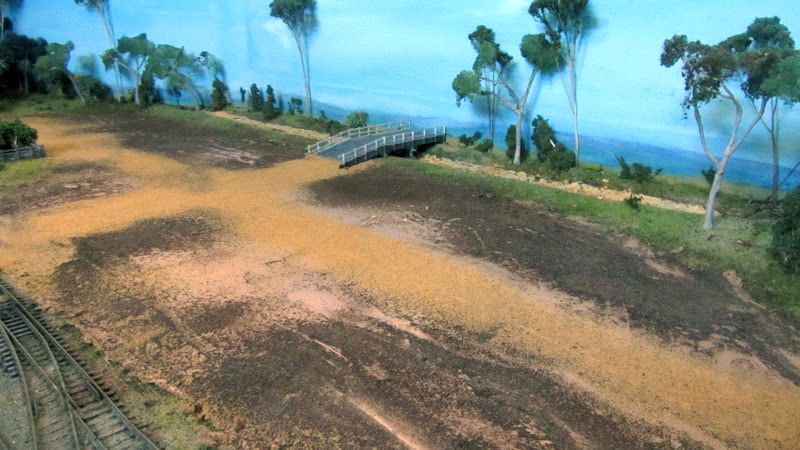 Looking along the area from the Down end again just shows the raised area on the station side of the creek. I use Brickies yellow Sydney sand for the road base sifted through a very fine sifter.  The brown soil is sifted & dried ground coffee beans rescued after use in the Expresso machine. The remainder goes into the main gardens & highly reccomended as a nutrient & composting material. 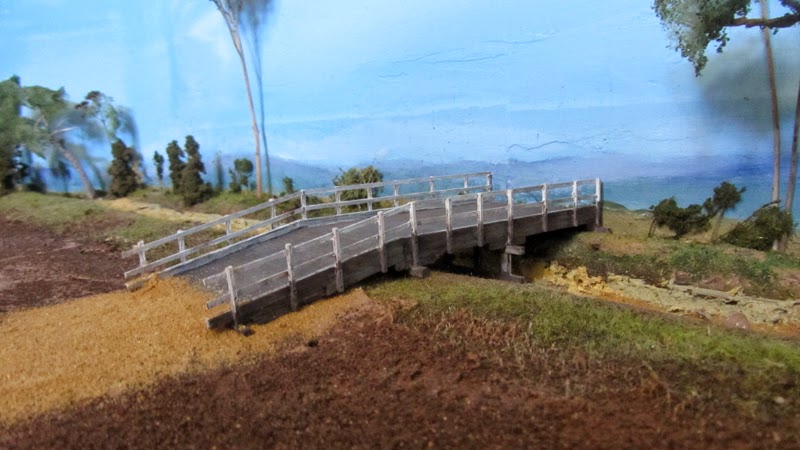 Outside of the buildings & stock yards, Coxes crossing is seperated by the creek, thus the need of a bridge of some type, a low flood or water way concrete crossing was considered but! As a young fella growing up we had a few creeks around my haunting ground, & the sound of cars going over the old loose timber bridges remains a wonderfull memory for me.  Three such bridges crossed the Toongabbie Creek at Northmead, Briens Rd, Hammers Road & Moxhams road, & there were several others in othe suburds as well.  Northmead Public school was not far from the Moxhams Rd bridge & was a busy road that throughout the day the noise from the bridge could well be heard, thus the need of such a bridge. 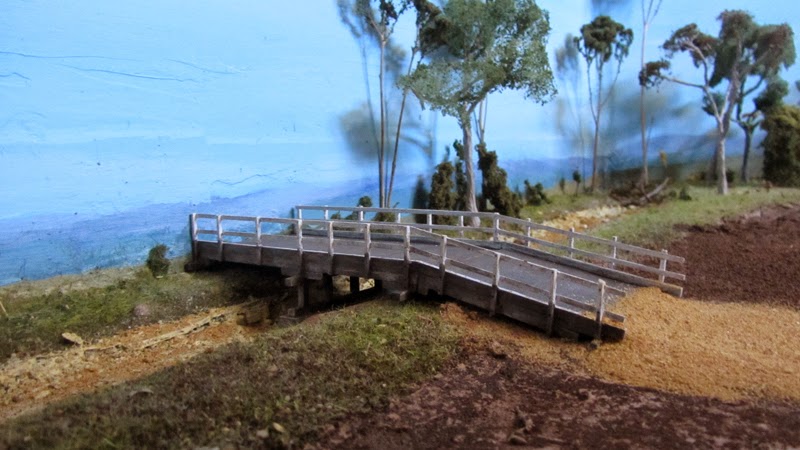 Going over the still cleared out creek I obtained a standard flat bridge kit from Rod Kelly of Laser Rail bits, which was a good starting point & after some modifications to it, the photo's show the end result, hindsight tells me I should have got the curved type rather than the flat, none the less I am more than happy with the end result.  I weatther the bridge using soft pastels, & some acrylic white for the rails.  I will build up the back wall a little & add some trees to take away the sudden stop affect that probably spoils the image. 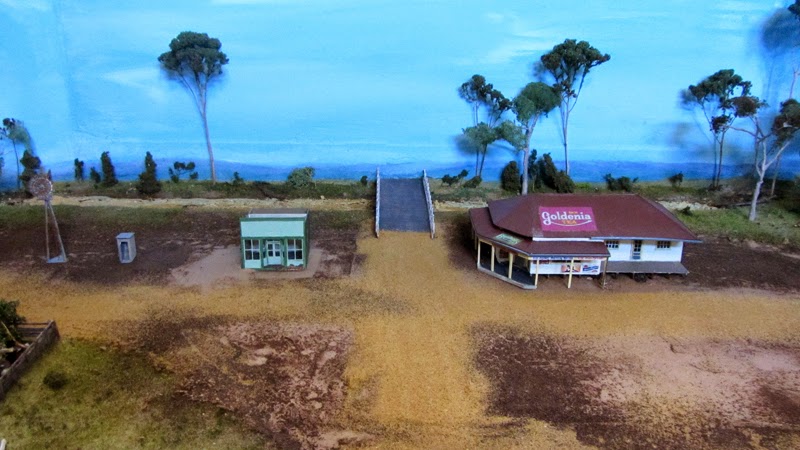 A few items set in place for the benefit of this photo & to mark out the footpaths etc. 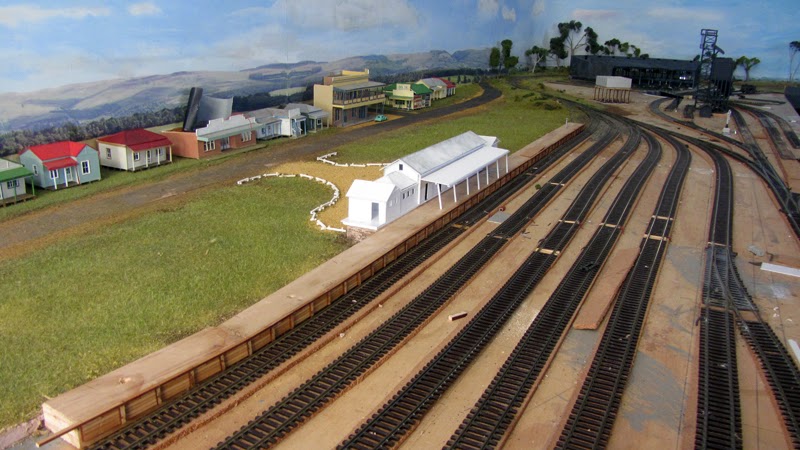 Some work at Moyblane has continued, including the building up of the base behind the station & to the road, same method as used at Coxes. The station is a representation of a station, not exactly accurate in a prototypical sense but it does contain the basic elements of some various types of stations found in country NSW.  The station faces are also Laser Rail items, needing 3 such kits with enough left over to cover the rear sections under the buildings.  The hardest part was glueing the facing to the curved end section at the forefront (Down) end of the platform. The station is long enough for a 6 car Rub set, with the van sitting off the platform.