After some months, well its more than a year really that any trains had run on Essence, & with a Meeting to be held here on 23rd July, a scurry meant clearing up & testing at least the main lines & primary loops to ensure I could run some trains prior to my doing a Powerpoint presentation dealing with tarps, timber haulage & some details on the working at Gosford during the electric & steam changeover days.

The day before the meeting, it seemed all things were working ok with the 2 diesels I had, also the 32 & 35cl were doing ok & no problems were found with them. With those working I decided to test a DJH 58 & 59 cl to see how they went, well things were not too great really owing to derailments of the two of them meaning they were put in the depot & sidelined.  Another problem also cropped up that had not been anticipated & made me go into the growl mode, while it would not affect any running it meant a fair rethink with it.

The problem turned out to be with the roundhouse, & I believe much of it was the result of living in an active clay area, evidence of the affects in the train room as well as in the house can be found with cracks developing around some areas of both structures.  The variables in temperatures this winter also has I believe added to the problem of movement in the baseboard & its structure.

When I had designed the RH, I went through some different stages & alterations to how the building was made, the end design had the building & floor all part of a single structure, with the pit & track all part of cut outs, the floor was built up with styrene, to just below the top of the rail, & meant to sit on the outer edges of the modified Peco inspection pits, with a sheet of 1.mm styrene running level to the rail height on the outside.

When finished all fitted in nicely thank you very much, but in the months of active clay movement, I found my measurements were too fine, an initial adjustment was made by cutting the styrene back somewhat, which did not work as well as I thought, what I also found was that the styrene had actually developed a bow in it along several of the mid pit sections meaning they sat up & the locomotive wheels would catch on them.  I have now decided to completely remove the remaining styrene flooring & either plaster between the pits, or cut more styrene & glue it to the baseboard between the pits, which I think will be the end option as it also allows for a much easier removal of the main roundhouse structure if needed in the future.

During the meeting there was some discussion about prototypical aspects of operating a model railway, this is something that frequently comes up in some circles especially relating to loads for specific engines over different routes & grades, a classic one is the load as well as length of a train that a garratt hauled. Generally speaking a garratt both light & heavy types hauled the same load on grades of 1:66 & over, but on grades such as 1:40 there was around 30tons difference, with the light types taking less, eg: 575tons for light & 605tons for heavy types, another difference was on the short north, where those loads applied from Enfield to Hornsby, but from Hornsby to BMD, another 50tons was permitted for both types.

Unlike smaller engines, a garratt was permitted to take those tonnages along with a length load of 58 S trucks + brake van, = 60 4 wheel vehicles.  Usually this length was only found on the empty wire train that did comprise that amount of S trucks, so as a bit of an experiment I decided to make up a train load of that length & see how it looked.

In doing this for fun, I found it difficult to really make it up to that long & be able to contort myself to take the photo of it, thus the following photo is made up of 54 S trucks & 3 CV trucks, making it 57 + Van.  The end of the train can be seen by the silver roofed PHG to the right side of the far wall. The length of the train works out at approximately 6 metres in length. 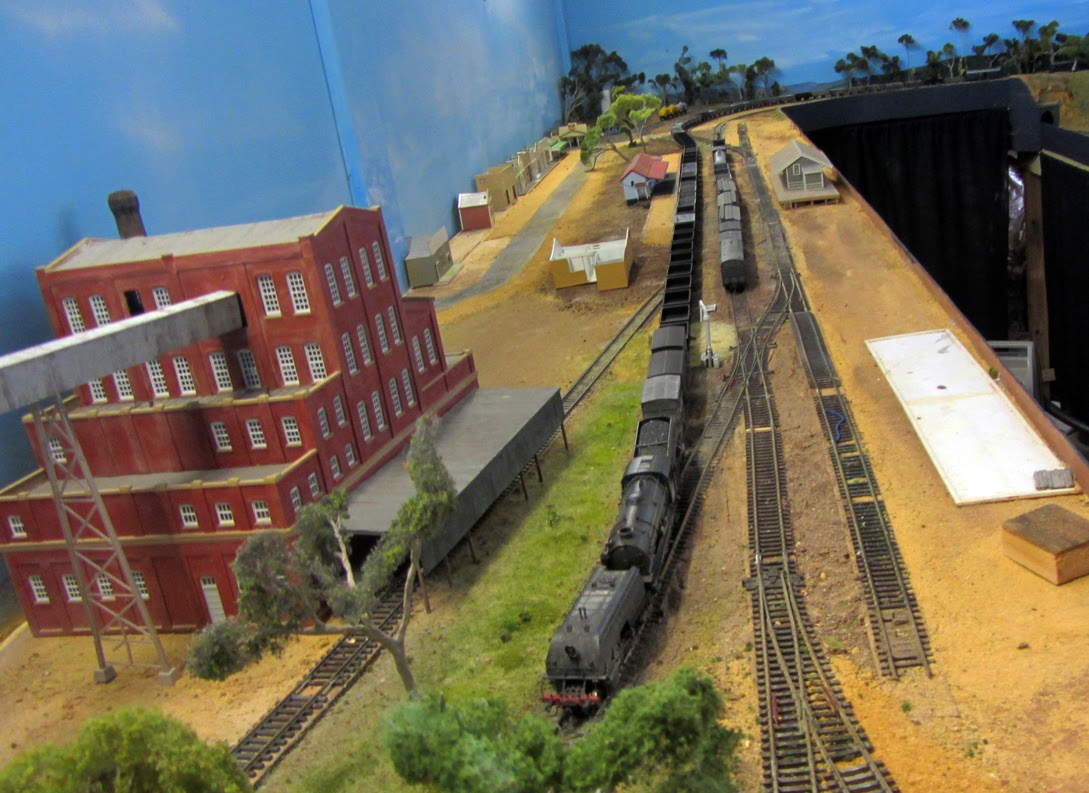 If one was to run such prototypical loads on my layout, & I am thankful of having a 6x6metre garage space for it, such a train would take up 2 sections as well as block everything in any of the 4 centres on the layout.