A short new post after some time & being away for a few weeks, & not a lot happening on the layout at the moment.

The header photo is put up for the benefit of those looking at yard lighting arrangements, a topic that has been raised on the AMR Yahoo group recently.

Generally speaking some locations that had mid sized yards, while lights were in position most of them were turned off at night when no shunting or train arrival/departures took place, some lights remained on over any foot crossings such as found at Narrabri West & also at Wellington.

Dubbo in itself was also a bit unusual owing to there being essentially two yards, the one to the left of the photo & on the town side of the main line, had quite a few roads as it served the large goods shed as well as other sidings. The area where 3055 is shunting leads to what was storage sidings, as well as petrol terminals on the right hand side of the depot.

Trains departing for the west could be made up on the loop line which was also the arrival road for trains arriving from Molong or Wellington, or they could be made up on a road next to loco, & depart from there as well. Trains to the East were usually made up in the same roads that next to loco or the dead end storage roads where the mail train carriages were placed.

Dubbo was busy enough in the 60's to have 2 x 30T used on the day & afternoon shunters, one performed the duties of the goods shed area, while the other one shunted the other side, plus as needed go to the Abatoirs or stock yards. There were also several sidings around the triangle on the eastern end.

Looking at the photo in regard to the overhead yard lights, there is a sign of consistant spacing especially noticed in the goods shed yard, on the other side the lights for the depot also illuminates some areas as well, likewise on the depot side is both the consistancy of the placings down at the dead end sidings but alse there is the less regulated placings based around the lights of the depot.

During many of my country visits in the 60's, it was pretty well common to find that yard lights, & the main platform lights were turned off when not required. During that time guards were issued with the same orange types of battery operated hand lamps that were found on Diesels, likewise the head shunters were also issued with them, these lamps threw out lighting that allowed them to be used as torches to illuminate walking areas that the old kero types were unable to do, a huge improvement. But meant that many locations kept the yard lights off unless shunting was required.
At stations, even when they were manned, only the building & awning lights were left on, the exceptions being when a passenger train was stoping or there was a water column at the end of the platform & it was required for loco purposses, often such a light had a switch on it which was turned off when watering was completed. These lights were also positione in such a way as to assist with the raking out & de ashing of steam loco's.

Edit in:    A side item to note in regard to the working of Dubbo yard & was found in many other yards around NSW was the use of single pole throw point handles as seen in the header photo.  Not all yards used the commonly seen throw over & ball type hold down levers, which often caused derailments when they did not drop correctly, or not thrown when a wagon trailed through them.

The pole points were spring loaded & when a wagon, loco or train ran through them, the blade would throw to that road, thus preventing a derailment when the wagon/loco would reverse while on the points. The point spring & throw mechanism was hidden under the metal safety cover.

While I have some of the Caboose industry ground throws that can be made to operate, I believe they are too large for NSW, even for appearances only, but these types of levers & cover could be readilly hand made & would authentic in yard areas. 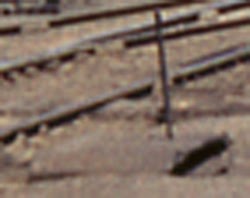 A short of close up of the point lever. Apologies for the quality as the original slide needs rescanning in higher resolution. One of those other jobs to be done.

The cover was in three sheet metal sections, sloped to ground level each end rising to the main cover plate. The lever handle was set into a spring loaded mechanism, so that it was pulled in the direction for blade reversal after which the handle sat a semi loose or slopy position as it was very much moveable by itself.   You did not want to be standing close to the handle when the points were reversed by a wagon running through them, as the handle gave a pretty quick slap in position.
Posted by Colin Hussey at 12:13