Around 10 years ago I did a 12 month digital media course at Tafe, at the time Digital photography was still very much in its infancy & 2 megapixel cameras were the talk of the town, the happy snappy cameras & then the first real mobile phone cameras were the teenagers delight.  Each of the students were assigned a specific major assignment & coped the wonderful subject of,  Will Digital Cameras replace film & slide camera as the primary medium for professionals.

At the time, all high end cameras were still film based, even video cameras that were then High resolution, or Broadcast Quality 720 recording. The assignment took 8 weeks to complete & based on every review, & professional area of research I looked into, the conclusion that I came to, which was agreed by the lecturer & others, was that until SLR, Large Format & other cameras were able to produce a minimum of 20 full megapixels, & not the shared or compressed types as found in the snappy happy & mobile phones types, then film would remain the choice of high end & professionals.

At the time I had not long purchased a new Film SLR to replace a 30 odd year old camera, & wow it was great, a couple of pro's I know also had invested in brand new top line body only Nikons at around $4500 each, then the lenses had to be taken in to account.  Fast forward to a mere 4 years after that when 6 & 8 full megapixel DSLR's were on the market & they changed, in 2008 I obtained a Pentax DSLR of 10 megapixels, two years I obtained a 12 megapixel Pentax K7 & both were excellent the K7 is brilliant for outdoor & proper photographic work,

Thus to my heading.

I have never considered myself a brilliant scratch builder, in fact pretty standard fair & often my kit building skills have not been much better. Over time though I believe the skills have progressively improved,  While I am not one that seeks to ensure every item built is pristine, I try to ensure they are all aligned well & where possible no gaps & then fill them as required. The closer they are to the eye, & therefore being able to detect problems, the closer attention I pay to them.  OTOH, if a building is more to be part of a backscene such as along the wall of both Akuna & Moblayne, I tend to be a little more relaxed in what I do.

In saying that, I do not throw stuff together, & do take time, I do not generally use an air brush on such buildings, as even Akuna which has a depth of 500 mm's its hard to pick up slight blemishes, & even when viewed at basically elbow length.  On those two areas, I am planning of having 2 pubs each, fairly typical for many small to mid sized town areas, & I have set about building each one of them in a different style, that in may ways is an ode or representation of the many pubs across NSW & perhaps Australia,  I would certainly not try to do one of the great Queenslander 2 story verandah type pubs, owing to the intricacy of them.

My first attempt was to convert a Walthers Cornersone Merchants row building into the corner 2 story pub. The following two photo's show the initial stages of the conversation. 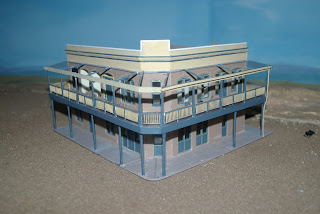 The above photo was taken using the old Pentax & still some bits had to be added such as some of the windows & door fittings along with the verandah covering. I was fairly happy with the work at that point as it was a fair amount of work involved. 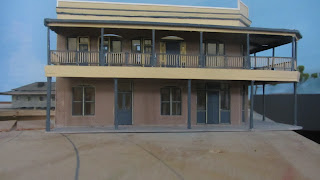 The above photo shows the building all but finished at the first stage, but using the new higher pixeled Canon camera. & this is where the heading comes in especially the UNTIL!  this camera with higher resolution really picks up every single imperfection in the models construction & the other little areas of problems especially with the painting, I chose to carefully hand brush rather than air owing to the pain in try to mask the very fiddly & fragile styrene posts etc. But as the building will go against the wall at Moyblayne, which is 1210 mm away from the front, I am happy with it.
That is the great part of these modern digital cameras in that they show up the errors, which mean the builder needs to much more careful in his ""practice"", sure time will help, but in not every area.  Thus the camera could be said as being picky'er  than the eye.

The problem though, as seen in the top photo is that the building is quite large, in both length & depth, which is really too much, I thought long & hard about what to do & I was thinking of punting it, then I thought of cutting it down, I would have preferred to cut the length back, however it would have spoilt the overall look & feel for it, Thus the decision was made to cut it back on the side or depth, so armed with a modellers hack saw, I worked out where to cut. Here under are the starts to the project, & sadly the new camera shows up some bloopers that are not noticed when the building is towards the rear of the benchtop, in fact 4-500 mm its not seen 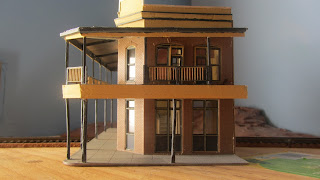 Above, The first cut was to remove basically half the depth of the side of the pub, I had to gently cut the two floors away, as well as the internal detail I had put in before, as well as needing to look at how the bottom floor which was the public bar would end up, well now its the smaller Saloon bar. The other fiddly part was to cut through the verandah, roof & the footpath as it took some time, patience & care 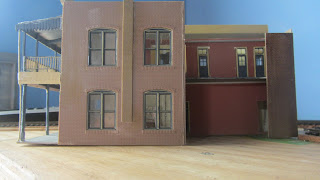 The old side wall which went to the same depth as the other side, also had to be cut down & refitted to the side. 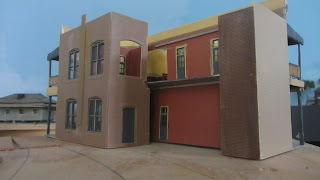 #3 With this stage completed, which included further cutting down of the remaining part of the side wall, & made it fit into the return area for the saloon bar, a short wall had to be also cut in on the inside to provide a continual bar wall in the saloon.  The Salmon pink brick sheets were Slaters products, very thin & flexible to work with but as the Merchants row was basically a 4 wall job, & all open inside, a lot of extra work was need to make the pub into a more typical accommodation type as seen in many areas such as & similar to the old Signal Hotel at WCK.

This hotel will be located at Moblayne with the shortened side against the back wall.

A fair bit of work is still to be done, but the new camera certainly picks up the UNTILL bit referred to.
I have now put the project to the side in order to concentrate on building from scratch a single story corner type weatherboard pub.  Having no plans to go by, & only some recollections of several old style pubs across NSW that had 2 bars & an oudoor beer garden, as well as the cold room was a free standing room out the back as were the toilets, it is to be very much the beaten old drovers/stockman workers pub, with no accommodation.
It has 2 bars, only, & like all my buildings they like this one will be internally lit.

Here are 3 shots of the pub under light,  The sad part is that despite a lot of time & work taken in the project & the hardest one I have yet down, when the daylight photos are viewed, the painting looks a shocker as do some of the finishing touches especially the awnings & facias, but now in place & some redoing, they will come up ok, & the presented photo;s will be a bit further back.

The samples here are just test shots with a battery of 2 banks of warm white lights cut from a reel of SMD 3528 strip lights, I do want to darken them a bit, also once some more detail is added inside the pub, the roof will be secured. 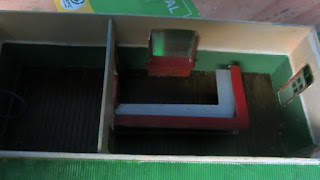 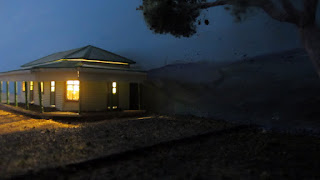 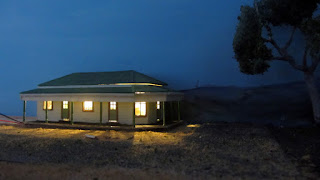 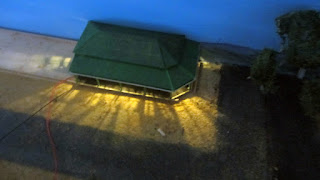